To win the most Doom Cards by inventing the best escape plans known to mankind.

Pick a player to read out the first Doom Card. Everybody now hatches an escape plan using one of the Object Cards in their hand to help them. When you've got your story ready, just go for it.

Example: 'You're on a walking safari. Aargh, wildebeest stampede!'

Luckily one of your Object Cards is a "Fart in a jar". You decide to use this to blast yourself into the air and hover there until the wildebeest have passed beneath you.

After everyone has explained their escape plan, it's time to vote. Everyone votes for the person they think came up with the best escape plan. The player with the most votes wins the Doom Card. If it's a tie, the person who read the card has the final decision.

Discard all the Object Cards used in that round, then each player takes a new one.

If you find yourself stuck with a seemingly hopeless combination of Object Cards, we'll let you use the Flip Rule.

Choose any number of objects from your hand and flip 'em, using your brand new items on the reverse to escape the inescapable. (Note: veteran players will agree that there is no such thing as "inescapable").

Legendary 80's TV secret agent MacGyver had a knack for getting out of sticky situations using a combination of everyday objects (usually involving duct tape).

If you want to play each round of Bucket of Doom using as many of the Object Cards in your hand as you want, then go for it. MacGyver would approve.

Think you're pretty hot stuff, huh? Managed to escape Freddy Krueger with nothing more than a rainbow and an eyeball, did you?

Well, it's time to introduce the Firesale Rule (everything must go). Each player is given ten Object Cards.

You can use as many objects as you want in your escape but here's the catch: you can't restock your cards until they've all been used. Happy death-dodging! 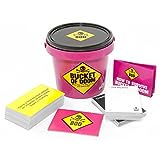 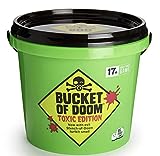 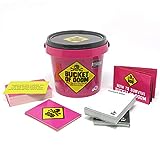 Bucket of Doom for Adult Parties and Gifts