Put the Game Board in the center of the table.

Everybody choose a pawn and place it on "Start".

Important: Choose ONLY the red, yellow, blue or green pawns. The orange and purple pawns are used only in Blurt Junior.

Everybody roll the die. If you roll the highest number, you're the first Reader.

If you're the Reader:

If you're not the Reader, you get to blurt:

If you're the Reader:

If you land on a square that's already occupied by another pawn, there's gonna be a Showdown! The two players on the square have a Definition read to them by another player.

If you're first to blurt the correct word, you win the showdown and may remain on the square. If you're not first, you have to go backward the amount of squares shown on the die.


You can only initiate a Showdown or a Takeover when you first land on a square that is either occupied or that matches the color of your pawn.

No matter the outcome of a Showdown or Takeover, neither player may initiate a second one until after they have moved to a different square on the board by blurting in regular play.

The first one to return to "Start", after going all the way around the Game Board, is the ... WINNER! You don't have to land there by exact count.

You can play in teams just the same way you would as individuals.

When you're the Reader, the others on your team cannot blurt answers but can help you decide who on the other team(s) blurted first.

The card box is passed from team to team, instead of from player to player.


Blurt with a Twist

If you have mastered Blurt! and would like to add some variations to the rules, here are a couple of ideas . . . and feel free to make up your own!

You only get one chance to blurt, so you better be sure you're right. If you blurt the wrong word, you must remain silent until somebody else gets it, or until another Definition is read.

Whenever a six is rolled, the Reader counts and announces the number of words in the Definition.

If you get to blurt, start bidding against other players on how many words of the definition you think you'll need to hear in order to guess the correct word. You only get one guess!

If you're the low bidder, you get a chance to blurt all by yourself. If you're right, move ahead six squares, but if you're wrong, go back six. 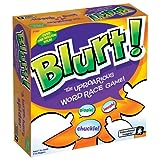 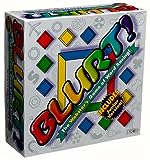