The Dark Age is over. The royal heirs, whose catastrophic war of succession destroyed the once beautiful capital city, are in exile. The courtiers who prolonged the war for their own benefit are in chains.

The proud peoples of Blue Moon City, bitterly divided by the conflict, are coming together to help and to heal. As the dust finally begins to settle, harmony slowly returns to the city. Now is a time of hope.

While Blue Moon City lies in ruins, its former glory can still be glimpsed amidst the rubble. The undertaking ahead is clear: the city must be rebuilt and its magnificence restored.

What's more, the people have the support of the three great Elemental Dragons, who have returned to help reunite the Holy Crystal of Psi and anoint a new steward. So, as the reconstruction begins, who shall prove themselves worthy to lead Blue Moon City into this new age of peace?

Blue Moon City - the board game - picks up where the two-player game, (Blue Moon), ended: the reconstruction of the destroyed city of Blue Moon.

The board, illustrated by Franz Vohwinkel as well as many well-known American fantasy artists, consists of 21 large building tiles, which show building plans on one side and the buildings in their reconstructed glory on the other. As in the 2-player game, the game includes 3 large molded plastic dragons.

At the start of the game, the board tiles all show their building plan sides. The object of the game is to use cards featuring the races of Blue Moon to help rebuild the city and, at the end, put the large Crystal of the Obelisk in the middle of the city back together.

Whenever a building is completely rebuilt, its tile is turned back over to its rebuilt side. The players who helped with a building get crystals and dragon favors, which can be traded in for crystals at certain times. in the presence of one of the mighty Dragons, they'll grant you a token of their appreciation. These rewards may be cards, golden dragon scales, or crystals: cards will help you make further building contributions, while golden scales can be traded for more crystals. …

You may discard as many cards as you wish during your Movement and/or Contribution Phases for their special power(s). However, once played, these cards can no longer be used towards a contribution.

Note that the Khind and the Mimix cards are exceptions to this rule, as their special powers directly relate to player contributions.

During The Movement Phase

Masters of the flame, the Vulca revere Lika the Fire Dragon, protecting the city with their sorcery.

Value 1: Discard to move the Red Dragon to any space (the Dragon may be inside or outside the City). … 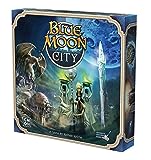 Blue Moon City VS Lost Cities the Board Game