Try to build a stack of balanced blocks without causing it to tumble!

Each player is allowed to cause the stack to tumble two times. If you make it fall a third time, you're a BLOCKHEAD! and out of the game.

Play continues until all but one player is out of the game.

Try to stack all the blocks without causing them to tumble! 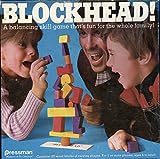