Battle of the Sexes Game Rules

Test your knowledge of the opposite sex through a series of gender-based questions and challenges. The first team to earn three trophies wins!

Ladies always start before gentlemen, so the Female Team gets the first turn.

Winning Trophies and Ending a Round

When your team successfully answers a Green question, the Trophy moves into your Winner's Circle. You've won the trophy!

The color space the Trophy sits on determines which color question to read.

Our Facts, Our Stuff, and Our Pics cards:

If you drew the card, read the question to yourself and choose how you would answer the question by secretly selecting a Decision Card (A, B, or C) and placing it face down on the board.

The other team must try to correctly guess the answer you chose.

If you drew the card, choose a member of the other team to simultaneously perform the move (or action) alongside of you. Both secretly read the move, and then start performing!

You can work together or separately, but remember: No talking! The first team to identify and shout out the move being performed wins.


To use a Challenge Token:

The first team to capture three trophies wins the Battle of the Sexes game. Congratulations - you're obviously the Superior Sex! 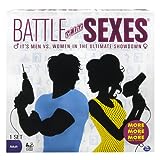 Battle Of The Sexes

Battle Of The Sexes 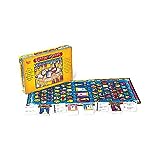 Battle of The Sexes