2. Place the grey round marker on the first space of the round track.

3. Sort the autobucks and place them near the game

4. Sort the 72 factory tiles by back side (A and B) and shuffle each stack separately. Place 18 of the A-tiles face up on the game board: 16 in the action area, and 2 below the sales offices.

Remaining A and B tiles are placed next to the game board.

5. Place the 10 black neutral workers in a pile near the game board.

7. Shuffle the 26 contract cards without an 'S' and put them in a face down deck next to the game board. The top 3 cards are revealed and put face up next to the deck to form the card display.

8. Each player chooses a color and takes:

Each round begins with an ACTION PHASE, in which players use their workers to take tiles for their factories and produce cars. Produced cars are placed on ships, heading for one of the two markets.

When all players have withdrawn from the action phase, the SALES PHASE begins. In order of their popularity, cars are now shipped to the markets and sold for money and victory points. The player with the most victory points after 4 rounds is the winner

Players take turns in the order shown on the player order track. Each player takes one action, then the next player follows. This continues until all players have withdrawn.

On your turn, you must do one of the following:


I. Take An Action

To take an action, first place workers on one of the 9 action spaces. If the space is empty, place 1 of your workers in the space. If you want to use an action space that is occupied by another player's workers you must place 1 worker more than the number of workers already there.

The workers of the other player are then returned to their owner, who may use them again on their own turn.

Important: You are not allowed to choose an action space with your own workers on it. If you want to use the same space again, you must wait until another player replaces your workers.

When you use the special production space (in the corner), you immediately carry out the action as described on the next page (do not take a tile).

All tiles that are replaced, are removed from the game and returned to the game box.

Yellow player chooses an action space with 1 blue worker. She places 2 of her own workers on the space, and the blue worker is returned to the blue player. Yellow player then takes the speedometer tile, and produces a family car.

Tip: When you use neutral workers, placing them together with at least one worker in your own color will help you remember that they belong to you.

Note: To choose a car production action, you must be able to pay for the car (see next page).

After you have taken and placed a tile, you finally carry out the action of your chosen action space. The action will either be to Produce a car or Draw a contract card.

If you choose a production action, you must pay the shown cost and produce the shown type of car. If you use the corner space you choose which type of car you want to produce, and pay the corresponding cost (1 for city car, 2 for family car, 3 for super car).

On your factory board you have one assembly line for each type of car. Decide which of the two markets you want to ship your car to. Then compare the demand tiles of this market with the symbols on all machine tiles along the assembly line of the car you produce.

Each demand that is met by a matching machine tile on your assembly line is worth 2-4 stars (popularity). Add to this all visible stars along the active assembly line, on manager tiles, and on all styling tiles you have for this car type.

Ship bonus: If your car tile is placed on a ship with a gold medal, immediately score the shown number of victory points.

Double demands: If a market shows two identical active demands, you need two matching tiles in your production line if you want to score both demands.

If you have only one tile, you only score one of the demands (the highest one).

Top car: If you produce a car with 18 or more popularity, the car is immediately shipped to the market and sold. Choose the reward of any one of the sales spaces for the chosen market (see Sales phase), and then return the car to your factory.

This sale does not count towards your sales limit in this turn's sales phase.

You may take back one of your cars from the ship at any time. If you run out of a type of car, you may therefore take back a car of that type in order to produce it again. Even if you cannot place a car on a ship, you still have to pay for the production action.

Special situation: If there are no more cards, score 1 victory point instead of taking a card.

Whenever you produce a car, you may play exactly one of your contract cards if the produced car meets all requirements on the card. Show the card to the other players, then place it face down under your factory board. It will be worth victory points at the end of the game. When you play your starting contract you immediately gain 3 Autobucks.

To play this card, you must produce a city car with a baggage trait and a popularity score of at least 6

To play this card, you must produce a car (of any type) with a spoiler tile and a popularity score of at least 8

These spaces may be used by any number of workers from any number of players. Workers here are not «replaced», and a player may use the space several times in a row.

Sponsor space: At any time on your turn (in addition to taking an action or withdrawing), you may place workers on this space to take 1 autobuck from the supply per worker placed.

Marketing space: When you produce a car (right before you place it on a ship), you may place workers on this space to increase the popularity of the car by 1 for each worker you place. This may help you reach the requirements on a contract card.

Take 1 autobuck per worker you place on the Sponsor space.

Place worker(s) on the marketing space to improve the popularity of a car being produced.

Instead of taking an action, you may withdraw. You may not reenter the round and you cannot use any workers that are returned to you after you withdraw.

To withdraw, place your remaining workers on the sponsor space and take 1 autobuck for each worker. Then place your player order marker on a vacant sales office.

The chosen sales office determines how many cars you may sell this round, as well as your play order for the next round. It may also provide a bonus which is awarded immediately when the sales office is chosen.

When all players have withdrawn, the sales phase begins. In this phase, players may sell their cars for money and/or victory points.

First resolve the ships above the North American market:

Start with the car with the highest popularity score. The player who owns this car must now decide whether to sell this car or to pass and leave the car on the ship. If the car is sold, the owner places the car on any free sales space in the North American market and takes the reward shown in the space.

Then continue with the car with the second highest popularity score: The owner of this car must now decide whether to sell. Continue until all cars on the North American market have had a chance to be sold.

Then resolve the ships above the European market in the same way, start- ing with the car with the highest popularity score.

The topmost sales space in each market is not limited to one car per round - any number of cars can be sold to these spaces. Cars that are not sold remain on the ships until next round.

Important: Each player may never sell more cars than their sales office allows. This limit applies to your sales in both markets combined.

Note: Having a sales manager will allow you to sell more cars.

Special Rule For Sales In A 2 Player Game:

In each market, only one car can be sold in each row!

Two player game example: Since a car has already been sold on the lowest row, Red player can only sell to one of the spaces on the second row.

After the sales phase, prepare for the next round:

The yellow player chooses to advance the right pending tiles in both markets. The demand tiles are slid down, and the tiles that leave the markets (speed tile and suitcase tile) go onto the vacant pending space in the opposing market.

After the sales phase in the fourth round, the game is over. Players now calculate their final scores.

Silver medals on a player's completed contract cards and on tiles currently in their factory are worth 1 victory point each.

E.g. in a 2-player game, the player with the most money scores 10 points and the other player scores 6 points.


Ties: If two or more players are tied, either for most remaining money or for final number of points, the tie is broken in favour of the player with the lowest numbered sales office (i.e the player who would have been first in player order in the next round). 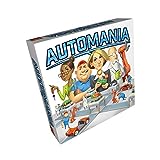 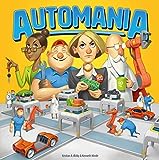