In Asara, you take on the role of a wealthy builder competing to bring the most prestige to your name through constructing the largest and most ornate towers in the city.

The game is played over 4 rounds (years), during which you will be acquiring the pieces for your towers and assembling them.

Players are given a hand of cards with different colors. On their turn, players play a card from their hand to an action space on the board. These spaces allow players to acquire tower pieces, get money, build a portion of their towers, etc.

Once a card has been played in one of the action spaces on the board, all subsequent cards played in that area have to follow the original card's color. Turns continue around the table until all players are out of cards for that round.

Scoring happens at the end of each round based on the number of towers a player has and the ornamentation present on those towers. 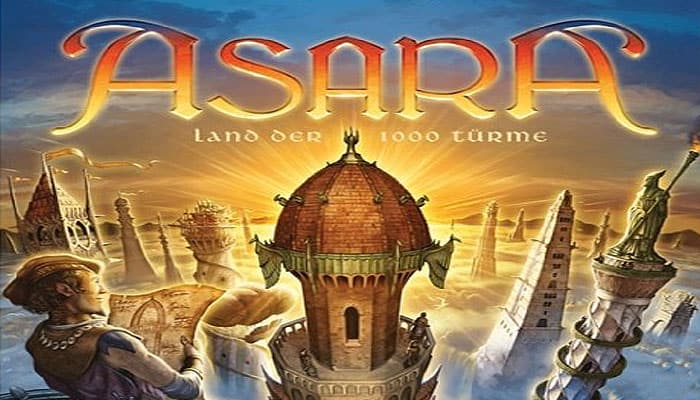 ASARA , the land of a thousand towers , opens its gates to you. Walk on boldly and you will find yourself in a magical realm where the cities are dominated by palaces with white alabaster walls and towers topped by gold domes .

All over these magnificent cities , cranes reach into the sky, at work on various building projects . Wondrous flying machines transporting heavy materials at dizzying heights can be seen from afar.

The Caliph's call for a competition to beautify the land has been heard far beyond its borders. And so now you have come to pit your skills against your rival architects... â€¦

The professional version of the game is played according to the same basic rules, but with the addition of two new elements: "Recruit buyers" and "House of the lighted windows". It is set up as described under point 8 on the crib sheet.

Before placing a buyer on a space on the board, the player must first pay the amount printed on that space into the kitty.

He is then entitled to take 2 buyer cards from the top-up pile.

House of the Lighted Windows

If a player places a buyer on a vacant space in the house of the lighted windows, he must either: â€¦

The Gifts of the Caliph

This expansion "The Gifts of the Caliph" can be used with the basic game of Asara, and also may be combined with the professional version of the game.

Place golden treasures on the five market space shown below. For the basic game, remove the four Gift cards with the lighted windows and use the remaining twenty Gift cards.

Shuffle the Gift cards and put them in a face-down pile next to the board. At the beginning of the game and at the start of each new year, randomly distribute the top five Gift cards face-up to the spaces marked with treasure chests on the board. â€¦