Are You Normal? Game Rules Each player takes the 7 tokens of the Yes/No color zone near them and one "Yes" and one "No" voting card of that same color.

Mix the question cards and place them, face down, in reaching distance of all players. One player takes a score sheet to keep track of all the players' scores.

The player who claims to be the most "NORMAL" of the group starts the game. Then play moves clockwise.

On your turn, read the top question card out loud. All players, including the player who read the card, place their "Yes" or "No" voting card face down in front of them based on their own personal experience: "Yes" if you have, or "No" if you have not.

Players now place one of their tokens on the Yes/No section of all the other players, guessing whether each player said "Yes" or "No" to the action on the question.

At the same time, all players (except the reader) have to guess what percentage of people who were polled on the question card said "Yes" and place one of their tokens on the percentage circles in the middle of the board that they feel is correct.

During the game, players have one opportunity to "double down", (i.e . place 2 tokens on one of the percentage circles in the middle of the board).

After scores have been written, players take back their color tokens and the next player will be the reader.

Play continues until one player accumulates the required amount of points as outlined in the beginning of the rules.

Now you will find out who actually is the most "NORMAL". 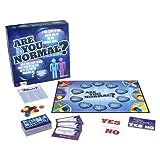