In the year 2097, the entire earth was enveloped in a cataclysmic climate shift plunging the globe into another ice age. Over 90% of the world's population was eliminated, driving the survivors to band together into loose communities and tribes.

Each player is the leader of a small tribe of survivors. Resources, tools, medicine, and mercenaries are all in scarce supply. Each tribe is pitted against other tribes in a fight for survival. The players build up their tribes, skirmish against other players' tribes, and can even bluff on the way to victory.

The leader who gathers the largest tribe will win the game!

Players work to build their tribes as large as possible by hiring mercenaries, scavenging junk piles and winning skirmishes against other players' tribes.

Each tribe member card in a tribe represents the number of people shown on the card. The player with the largest tribe (most people) at the end of the game is the winner.


Anatomy of an Arctic Scavengers card

The cards are designed to make it easy to identify the different types of cards, make sorting and game setup quicker, and facilitate faster decision-making during the game.

Understanding the above card anatomy

Every card has a type (person, tool, medicine), title, image, and actions. Standard actions can be performed by this card alone, action modifiers must be combined with another card, and disabled actions cannot be used.

Some cards will be sorted based upon supply pile icon, others by card title. Some cards have other identifiers (instructions, cost, and number of tribe members represented by the card).

Arctic Scavengers can be played by 2 to 5 players. Each player takes an identical starter deck representing her tribe. That deck consists of 10 cards:

cards and place them face-down on the

The remaining cards (the ones with character portraits and a cost listed) are the mercenaries. Sort them into 8 separate stacks, by mercenary type. Place them face-up on the playing surface in separate stacks.

Each player shuffles her deck of 10 cards and places it face-down in her play area. Randomly select a player and hand her the initiator card. This player will serve as the initiator for the first round.


When Playing with only two players

Each round of Arctic Scavengers has three phases, played in the order shown below:


During this phase, each player plays any number of cards from her hand in order to add more resources (cards) to her deck. Gathering starts with the player that has the initiator card (lying in her play area) and play continues in clockwise order.

There is no limit to the number of actions that a player can take during the resource gathering phase, although no action may be taken more than once.

There are three primary resource gathering actions: dig, hunt, and hire. Dig allows the player to retrieve cards from the junkyard, hunt enables the player to get food (used as currency during that round), and hire uses a combination of Food

from hunting and medicine

The number of cards is determined by the sum of all the dig numbers displayed on the card(s) played from the player's hand. As with other actions, draw may only be used once per round.

For example: Natalie plays a brawler card in her play area and declares a dig action. Since a brawler has a dig value of 1, Natalie draws one card from the junkyard and places it in her discard pile.

If Natalie were to also play a shovel, then the combined dig score would be 3, as shovel adds 2 to dig. Thus, Natalie would draw 3 cards from the junkyard, select one to keep (place on her discard pile) and return the other 2 to the bottom of the junkyard.

The player draws one or more cards from her deck, adding them to her hand. Multiple cards may be combined to draw several cards. As with other actions, draw may only be used once per round.

This combination enables Anna to draw 4 cards from her deck and add them to her hand. Anna could also play two scavengers and a scout to yield the same result.

The hire ability is a free action (no card is needed to grant this action) in which a player takes a mercenary card from the face-up piles of cards. The player must be able to pay the cost displayed on the card. There are two currencies: food and medicine (meds).

Food is created in real-time using the Hunt action (described below). Meds are provided in the form of medicine cards (pills and medkit) that must be played from the players hand in order to complete the purchase of a mercenary.

Medicine cards do not require an associated person to spend. Each player may only hire one mercenary per round, and the player immediately adds the card to her discard pile.

The hunt ability generates food during the round that can then be used as currency for purchasing a single mercenary card. The amount of food generated is determined by summing all hunt abilities played from the player's hand.

The player can assign tools to the mercenaries to improve their hunt abilities.

For example: Natalie plays two scavenger cards and a spear card. Each scavenger has a hunt of 1 and the spear grants one of those scavengers an additional hunt of 1. Her combined hunt score is 3. Natalie can now spend 3 food this round to hire a mercenary card.

The trash ability is a free action (no card is needed to grant this action) that allows players to take any number of cards from their hands and add them to the junkyard supply pile. The player does not draw cards from her deck to replace these cards.

Throughout the course of the game, players may add cards to the junkyard. This can occur when players use the Trash action (see above) or when skirmishing for a contested resource ends in a tie.

When cards are added to the junkyard, players place them face-down on top of the junkyard and then shuffle the entire junkyard deck.

Each player starts with two tools - a spear and a shovel. Players can find additional tools by digging in the junkyard. Tools cannot perform actions on their own (these are inanimate, objects after all). A tribe member can use a single tool that enhances the ability of the action the tribe member is performing. Using a tool does not grant a tribe member an ability that she cannot inherently perform.

For example: Anna could combine her scavenger (dig 1 / draw 1 / fight 1/ hunt 1) with a shovel (fight +1 / dig +2) to achieve a dig of 3. If Anna would prefer to use her scavenger to hunt, the shovel could not be used to improve the scavenger's hunt value, since the shovel does not have the hunt ability.

Thus, Anna could not use the shovel this round to dig unless she has another tribe member card (perhaps a refugee) capable of digging that could use the shovel.

Playing multiple cards for an action improves the results. This could involve playing multiple people or people with tools. The total of all ability values played is used to perform that action (provided that the total is 1 or greater).

Although many cards support multiple actions, once a card has been played for a given action it cannot be used for another action during that round.

For example: if Natalie plays a refugee card, this can be used to either dig in the junkyard or hunt for food. Under no circumstances could she use the card for both actions.

III. Skirmish Phase (Round 3 and following)

The game continues like this until the last contested resource card is won.

No Skirmish until the Third Round

The game begins with two rounds of resource gathering (digging in the junkyard, hunting for food, and hiring mercenaries). In the first two rounds, there is no skirmishing. This allows each player to get a solid foundation prior to skirmishing over the contested resources.

Once all the players have completed their resource gathering actions, the skirmish phase begins. All players simultaneously reveal the cards that they have saved for the skirmish.

The sum of the fight values from all of a player's cards represents the strength of that player's attack. All rules related to tool usage also apply to tools used as weapons during the skirmish phase (see 'Using Tools' above).

Skirmishes are resolved by starting with the Initiator and having her declare any actions performed by her units (including saboteurs and sniper teams).

Play then passes to the next player in clockwise order to declare actions for her units (provided that they were not sniped or disarmed by the previous player).

This continues until all skirmish actions have been resolved. Then the total remaining fight values are summed and the player with the highest fight value wins. The winning player draws the top card from the contested resources supply pile and adds it to her discard pile without revealing it to the other players.


Resolving Ties During the Skirmish

In the event of a tie, each player sums the number of people involved in the skirmish (this includes refugees and tribe families that may not be directly contributing to the fight score) and the player with the most people involved wins the skirmish.

If players are still tied, then the skirmish is considered a deadlock. The players place the top card from the contested resources pile into the junkyard pile without looking at it. The players shuffle the junkyard and the round ends. The player with the initiator card passes it to the left to begin a new round.


Peeking at the Contested Resources

Beginning with the third round, the initiator looks at the top card of the contested resources stack. The player does not reveal this card to the other players.

After looking, the player returns the card, face-down, to the top of the stack. This provides the first player of each round with special insight regarding what resource will be contested over during the skirmish phase.

She then places her remaining cards in her play area, face down, and announces the number of cards she is taking to the skirmish.

Sometimes a player has additional tools that cannot be used, or refugee / tribe family cards that have no tools. The player should carry these into the skirmish anyway. This presents an apparently stronger hand to her opponents and may impact the decisions that they make.

When resolving a skirmish, the player with the highest fight score wins. Several factors affect a player's fight score: each player totals the attack abilities of each of her tribe members, adding the modifiers, and factoring in special actions such as disarm and snipe (explained later).

When the final contested resource card has been won, the game is over.

The winner is the player who has built the largest tribe.


Players determine the size of their tribes by counting the number of tribe member icons on the lower right corner of every card in their decks. 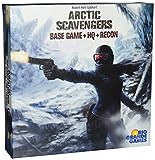 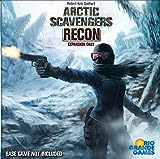