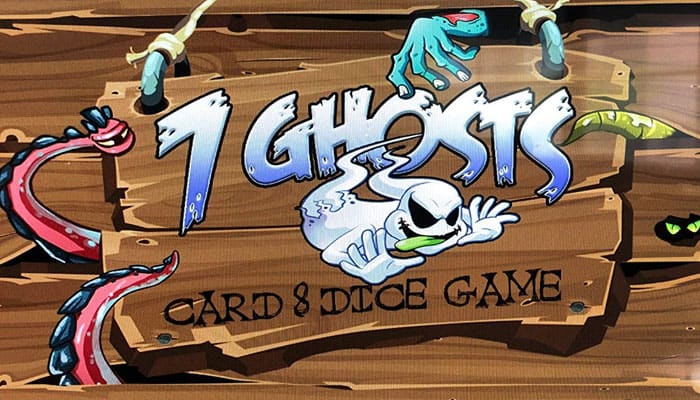 The winner is, as the name suggests, the first player to collect seven ghosts. Ghosts are hidden in both the main deck, and the "Spooky Action" (Small Cards) deck.

Set aside the one "Escape" card, then deal four face-down piles of 6 main deck cards (Large Cards) each as shown here:

Make sure the "double ghost" card is randomly planted in the first 12 cards dealt.

Reveal the top card of decks 1 through 3. Deck four is considered the "mystery deck", and its top card is in the face-down position until picked by a player to try and collect. Top card remains face-up until collected by a player.

Then give each player one starting "spooky action" card. These cards are used to help you capture cards from the main deck, and hinder your opponents from doing so. Spooky action cards are earned as the game progresses by dice rolls (discussed later) and awarded when winning some of the main deck cards.

On each turn, a player declares which main deck card they are rolling for. These cards may be ghost cards (you need seven to win!), zombie cards, scary pumpkin cards, or haunted house cards.

If the player chooses, they can turn over the mystery card, but if they do, they must play for it on that turn. Each card shows the necessary roll to win it at the right side of the card.

For example, this zombie card shows you need a roll of 2 aqua to capture it.

The bottom right of the card shows that when you win it, you also get one "Spooky Action" card. The card also shows an action that you can use if you trade in (discard) 3 of these cards

A player gets two rolls per turn; the initial roll and the reroll. The player can choose to reroll one, two, or all three dice. Once a player wins a card from the main deck, they place it face up in front of them and the rolling part of their turn is over.

The player can still play any spooky action cards (or vanish cards) they like before relinquishing their turn.

Note: A player receives a "spooky action" card if at any time during their turn the dice show one of each color (aqua, purple, and black). Only one spooky action card per turn is received based on the dice roll.

Let's assume player one chooses to roll for the zombie card mentioned above. He/she rolls all three dice hoping for 2 aqua needed to win the card.

The player can then reroll one, two, or three dice as needed. If they are unsuccessful, they can play cards from their "spooky action" hand before their turn is over.

If they are successful, they take the zombie card and place it in front of them. They then draw one "spooky action" card, as the zombie card instructs them to. Spooky action cards are kept secret, and cards from the main deck are public knowledge.

Player two then decides which card they are rolling for. Again, they may choose to flip the mystery card, but if they do, they must roll for it on that turn.

Game play continues this way until one player reveals that they have seven ghosts and are declared the winner!

We have discussed the overview of the game. Along the way, there are many dynamic tactics and plans that can be useful in trying to win. Let's look at the options provided by "Spooky Action" cards.

One key card is the "OFF LIMITS" card. Play this to keep an opponent from playing from a particular deck on their turn. Place it on top of the deck you wish to block as shown here. When it is your turn again, the card is discarded.

Of course, your opponent may play one on you!

The "SCARED WITLESS" card forces your opponent to play a particular card, which naturally keeps them from playing other cards you may want win for yourself.

The "WISE MOVE" card allows a player to "split" the top card from a stack. To do this, move the top card to the side, and flip the one beneath it. The player can now choose to play either card.

If neither card is won, they both remain for the next player. If one card is won, place the other on top of the deck (if it is not already there). This tactic sometimes reveals an easy ghost to obtain.

The "DOCTOR FUTURE" card allows the player to view a top face-down card or the bottom card of any deck.

The "UNDERTAKER" card allows a player to win a card from the bottom of any deck without rolling for it. This is very helpful if you have learned what is at the bottom of a deck.

Note: When any deck is down to one card, this card is considered the top of the deck. That means to use the undertaker card, there must be a card on top of it.

The "GRIM REAPER" card allows a player to win any eligible card without rolling for it, or take one card from opponents spooky action hand.

The "DIRTY RAT card allows a player to roll ol o card on the bottom of any deck. If the card is not won, it returns to the bottom of that deck.

These cards state that a die of one color can be changed to another color, thus helping you to win an important card. Also, there are cards that allow you to set one die to any color before your roll. These cards can strategi- cally be saved for important times in the later stages of the game.

Ghost cards count toward your overall ghost count. There are 3 of these in t he "Spooky Action" deck.

As mentioned earlier, this card is set aside at the beginning of the game. The player that captures the Plant Escape Ghost card can "plant" the escape card anywhere they like in the Mystery Deck.

Don't peek at the other cards... a good way to do this is under the table, so no one can see and you can "count" which position the card is in.

Whoever draws this card (or is forced to play it) must roll 2 black or lose one of their main deck ghost cards to the bottom of the mystery deck. Whether or not the player succeeds or fails, the escape card is then discarded.

Note: If the mystery deck is 'empty , the player can choose to plant the escape card in one of the other decks.

The Haunted House, Zombie and Pumpkin cards each have specific rewards for collecting 3 of a kind.

The benefit is listed at the bottom left of each card type. Three Zombie cards can be traded in for an off limits effect. Instead of an actual off limits card, just place the 3 zombie cards on the card you wish to put off limits.

Three Pumpkin cards are considered "wild". This means the player can change the result of any one die to another color. Use this at a key time!

Three Haunted House cards together can be traded in for a "scared witless" effect.

After cards are used in this way they are discarded.

A player who already has a haunted house, pumpkin, or zombie card at the beginning of their turn is eligible to play for a run of two like cards on their upcoming turn.

The player must win the first card in order to go for the second. Likewise, a player with a pair is eligible for a run of three in a row (very rare occurrence). Ghost cards are not eligible for runs.

For example, player one has a zombie card gained from their last turn.The board has 2 Zombies showing as shown here. Player one declares they are rolling for a particular zombie card hoping to win it and extend their turn.

Note: The card that is revealed after winning the zombie card is also eligible for the run (if it happens to be a like card, in this case, a zombie).


Clarification For Peek And Look Cards

When you capture! one of these cards, you can look at the next card of the stack it came from or the bottom card of any two decks. This helps you plan for future strategies, and may pinpoint the location of a ghost.

There are only five "vanish" cards in the entire deck. Two Zombie card, Two Pumpkin card and one Haunted House card can be used for the vanish effect.

To do this,,on your turn, discard a vanish card you already have. You can then move the top card of any stack to the bottom of that stack. This may keep your opponent from getting a card you didn't capture and keeps it available for later in the game.

However, this may break up a 3 of a kind you were planning on using at some point.

OH NO YOU DIDN'T and OH YES I DID cards: A player can keep an opponent from playing an OFF LIMITS or SCARED WITLESS card by discarding an "OH NO YOU DIDN'T" card from their hand. (The player initiating off limits or scared witless then loses their Spooky Action card)

However, if they have the OH YES I DID" card, they can play it and trump "OH NO YOU DIDN'T". This would allow their initial action to proceed as planned.

We hope you will have loads of fun and enjoyment with "7Ghosts". Happy haunting!

Clarification for winning the Pumpkin Cards:

Since a pumpkin card requires a roll of "one of each color" to win it, the player receives 2 spooky action cards when successful. "Draw 2 spooky action" is printed on the card itself.

The player DOESN'T receive a total of 3 spooky action cards, one for the dice roll and 2 for the card.


Some Strategies and Tactics:

It is important to win Haunted House cards and view the bottoms of decks. This knowledge can help when splitting decks later with 4 Wise Choice" card, or using the "Undertaker" or "Dirty Rat" cards.

A player can "Vanish" a ghost card to the bottom of a deck to keep it away from opponent and play for it later.

Saving dice changer cards that change colors to black helps to win the double-ghost card when it appears.