There are 6 Player Mats, each representing a type of hero. These mats are double-sided and have a different hero on each side. Each Player Mat has its own deck, as shown below.

For example, if you want to play as the Wizard, you must take the blue deck.

There are two types of cards in the Hero Decks:

Resource Cards have one or more large symbols in the middle. These are used to defeat cards in the dungeon by matching their symbols.


Action Cards are cards unique to each Hero Deck. Some of these allow you to defeat certain types of Dungeon Cards, while others let you draw, steal, or give away cards. All Action Cards have a black border.

These heroes specialize in arcane knowledge, so they are the best heroes to rely on when you need Scrolls.

The Wizard's Stop Time ability pauses the game timer. It remains paused until a player plays a card. Discarding cards, using abilities, or turning over a new Dungeon Card does not restart the timer.

Magic Bombs provide one of each symbol when played, so they are useful against Bosses or cards that require many different symbols.

You don't have to use all the symbols when you play a Magic Bomb.

Cancel stops Event Cards from taking effect. It is especially useful for protecting your team from events that would force you to discard, such as Sudden Illness.

These heavily armored defenders are the heroes with the most Shield symbols in their deck.

Divine Shield pauses the timer and also allows all players to draw a card.

The Holy Hand Grenade allows you to instantly overcome any card you may face, including Mini-Bosses, Events and Bosses. It is the only card in the game that can instantly defeat Bosses.

Heal allows a single player to put all of their discarded cards back into their deck. This card can save a player who has run out of cards!

Health Potion allows all players to recover 3 cards from their discard pile back into their hand. This card is best used right after the team has been forced to discard useful cards due to a Sudden Illness or other event.

This powerful pair prefers to use brute force melee attacks to defeat challenges that they face. As a result, their deck is the best one in which to find Swords.

Double Symbol Cards count as a sword plus one other symbol. These are best used against Dungeon Cards that have both symbols on them, but in a pinch they can serve as one or the other. You don't have to use both symbols when you play them.

Enrage allows you to choose two players to draw 3 cards.

You may choose yourself as one of the players if you like!

These nimble heroes are masters of stealth and evasion, which is why they have more Jump symbols in their deck than any other heroes.

Donate allows you to give your hand to another player. This card is helpful when you have good cards in your hand that you want to keep, but also need to search for something else.

Donating your hand to another player keeps your good cards in the game but also lets you immediately draw a new hand.

Steal allows you to take another player's hand, which can be useful if they want to use their ability but have cards in their hand that they don't want to lose.

These two nature-loving heroes are very skilled with ranged weapons, so they're the best choice when you need Arrow symbols.

The Huntress' Animal Companion ability allows her to choose another player to draw 4 cards. She cannot choose herself.

Wild Cards can be played as any one symbol of your choice.

Healing Herbs allow you to have a player recover 4 cards from their discard pile to their hand. This card is best used if a player has just been forced to discard something useful. 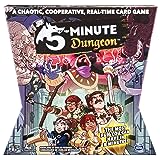