To correctly identify well-known people, places, things and years through a series of clues. The first player to reach FINISH wins the game.

The Reader: The youngest player goes first by selecting a card and saying, "l am a____(Person, Place, Thing or Year)" as shown at the top of the card.

This player becomes that Person, Place, Thing or Year for this round, and is known as the Reader. The Reader should not show the card to any other player.

There is one Person, Place, Thing or Year on each card. Each card has clues numbered 1 through 20.

The player on the Reader's left (the Guesser) announces a number between 1 and 20, then covers that number on the board with a red chip.

The Reader reads the clue with the same number that the Guesser chose.

All the clues that the Reader reads in this round are from the same card and pertain to the same Person, Place, Thing or Year.

On each turn a player must choose a clue before guessing. After listening to the clue, the Guesser has 10 seconds to guess the Reader's identity.

When the Guesser guesses correctly, the Guesser and the Reader determine their score (see Scoring, below) and move their playing pieces accordingly. The current round is over, and the player on the Reader's right becomes the new Reader.

When the Guesser guesses incorrectly, play continues in a clockwise direction. The player on the Guesser's left becomes the new Guesser, chooses a number, covers it on the board, listens to a clue and guesses.

Play continues until a Guesser correctly guesses the Reader's identity. At any time, players may request that the Reader read all of the clues already chosen. There is no penalty for incorrect guesses.

Each 20 Questions card has a value of 20 points. All 20 points are divided between the Reader and the correct Guesser.

If the Reader reads all 20 clues and no player guesses correctly, the Reader scores all 20 points, the current round is over and the player on the Reader's right becomes the next Reader.

The Bonus Player announces any 5 numbers, one at a time. The Reader reads the clues as they are chosen. The Bonus Player may guess after hearing any number of the 5 clues, but may only guess once during the Bonus Round.

When players land on a Bonus Space during the middle of a turn, the Reader continues with the card in play until a player guesses correctly then starts the Bonus Round. The Bonus Round ends if the Bonus Player chooses a "Lose a turn" clue.

The Bonus Player moves on "Move ahead" and "Move back" clues, then the Bonus Round continues. The Reader does not move during a Bonus Round.

The first player to reach finish wins the game. Players need not land exactly on finish to win.

The Classic Game of 20 Questions 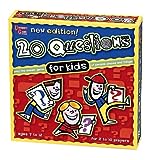