Zoo run is two games in one! The first, "Free the Animals" is a cooperative game for ages 4 and up. The second, "The Race of the Year" is a competitive game recommended for ages 6 and up. You can play both games, one after the other, or just play one of them. Have fun!

A Cooperative game force ages 4 and up.

Work together to help the animals escape the zoo before the Zookeeper comes and shuts the gate! Line up your cards so that they show whole animals to set them free!

The game is played over a series of turns until all the animals are freed or the Zookeeper reaches the enclosure.

You all play at the same time. Each turn, line up your 3 cards in whatever order you choose to form the animals. Watch out: your cards must be placed neatly, making a straight line with each other:

How do you save the animals

Once you have decided how to line up your 3 cards, take a good look at them. If you succeeded in forming whole animals, well done!

Take the right tokens for the animals you formed from the board and place them on those animals on your cards.


Hint: You can always form at least 1 animal.

Once all players have finished lining up their cards and placing their animal tokens, place those tokens in the box. Well done! You freed them!

Note: If there are no more tokens for an animal you formed, don't worry! It means that the animal is already free and you don't need to put a token on it.


The Zookeeper is getting closer

If not, discard all of your cards and give 3 new ones to each player. If needed, reshuffle all of the discarded cards and add them to the draw pile. Start a new turn and keep playing until the game is over.

The game ends once either there are no more Animal tokens in the enclosure or when the Zookeeper enters the enclosure.

All together, count the number of animal tokens still in the enclosure:

A competitive game for ages 6 and up

Now that the animals have escaped from the Zoo, cheer them on in the race of the year.

Choose an animal to be your favorite and help them cross the finish line! Line up your cards to form animals and pick up Crowns to win!

The game is played over a series of turns until one or more players have crossed the finish line.

You all play at the same time.

Each turn, line up your 4 cards in whatever order you choose to form the animals. Watch out: your cards must be placed neatly, making a straight line with each other.

When all of the players have finished lining up their 4 cards, each player moves their character on the racetrack following these rules:

A Each whole animal formed lets you move forward 1 space.

B If the animal you formed is your favorite you can move forward 2 spaces. Take one Crown token

for each favorite animal formed.

Now keep one of your cards and discard the other 3.

Draw 3 new cards and put them in front of you so that you once again have 4 cards. If needed, reshuffle the discarded cards and add them to the draw pile. Keep playing more rounds until at least one of you has passed the finish line and put their token back into the box.

The first player to pass the finish line wins the game!

If multiple players pass the finish line at the same time, they compare the number of Crowns they picked up during the game.

The player with the most Crowns wins. If there is still a tie, all of the tied players share the victory. 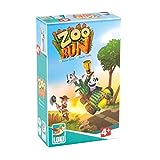