Score the fewest points over a number of rounds by being the first to play all your cards.

Zip Zap is played in rounds. To start a round, turn over the top card from the deck into the center of the playing area. Then, without taking turns, discard cards onto the face up pile according to the following rules:

(For example, if the top card is a red 3, then whoever has either the red 4 or the wild 4 can play a card).

Continue discarding cards according to the above rules until the round stops with one of the following events:

Your Zap card is powerful because it allows you to retain control of the round even if you don't have the next number card in sequence. (Think of it like a wild card).

However, you may only play your Zap card if you played the last number card on the discard pile.

To play your Zap card, call out "ZAP!" right after you play a number card and then place your Zap card on the discard pile. Then continue the round by playing any card you want from your hand to the pile.


Ending a Round and Scoring

A round ends immediately when a player has played their last card (including Zap card) and shouts "Zip Zap!" Then all other players count up the cards left in their hands. Each solid colored card counts for 1 point.

Then gather all the cards (including any that were in the face down deck), shuffle and deal out another round. (Remember to give each player a Zap card).

Play a number of rounds equal to the number of players. (In a 2 or 3 player game, play two rounds per player).

Whoever has the lowest score at the end of the final round wins.


Alternate: Eliminate the per-card scoring rules and simply award one point to whoever goes out first each round. At the end of the last round, whoever has the most points wins. 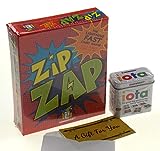