The elephants are preparing for the show of their life.

Help them to achieve the wildest combinations by defying the basic rules of physics.1000s of combinations can be achieved in this fun game of balance.

To be the player who puts Elephant # 10 on top of the pyramid without making the pyramid fall.

Elephants have to be put on the pyramid in numerical order from 1 to 10.

Pieces can be placed in the pyramid in any position.

When pieces are added to the pyramid, it can be placed at the same level as the highest piece(s) or above it; never below.... Elephants trying to build up the best pyramid.

The players who puts elephant # 10 on the pyramid, without making the pyramid fall, wins the game. 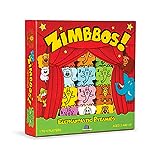