You Are a Liar Game Rules 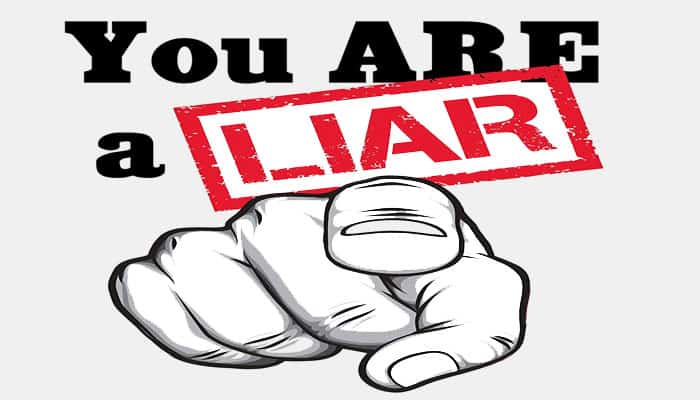 Sort the cards into three piles, with all the TRUE cards, LIE cards, and FINGER cards placed in three separate piles at the center of the table. The TRUE and LIE cards should be placed face-down so the statements cannot be seen.

Each player starts with one freebie FINGER card in their winnings pile.

The most honest player is the first "guesser". It's up to you to decide how to figure that one out!

The "guesser" turns their back to the table. We'd recommend simply closing your eyes, but that would make it too easy to cheat!

Example: If you are playing with 4 players, one player is the "guesser" which means there are 3 players that need to select cards. As a group, you may select 2 TRUE and 1 LIE, or 1 TRUE and 2 LIE, or 3 LIE cards. But the group may not select 3 TRUE cards.

Once everyone has selected a card, the "guesser" now turns around to face the table again. Unless you want to make the game really easy for the "guesser" to win, the other players should be very careful to cup their hand over the symbol on the front of their card which indicates whether their card is truthful or a lie.

Starting with the player to the left of the "guesser", each player reads the statement on their card (on some cards there is also an explanation blurb - which is included for interest sake - and should only be read at the end of the round).

After each player is finished reading, the "guesser" must decide if their statement is false. The "guesser" does this by placing a FINGER card (taken from the center pile) in front of that player.

This must be done before the next player reads their statement. If you change your mind... too bad, there's no going back on an accusation!

So, don't place a FINGER card in front of someone unless you are pretty confident that their statement is a lie.

For every correctly guessed LIE card, the "guesser" places that FINGER card into their winnings pile. All wrongly accused FINGER cards are returned to the center pile.

In addition, for every TRUE card that the "guesser" wrongly accused of being a lie, a FINGER card must be placed from their winnings pile into the center pile (unless they have none left).

After each round, place the used cards to the bottom of their corresponding piles. Play continues with the role of "guesser" moving clockwise around the table.

Who is a human lie detector?

The game is over when there are no FINGER cards left in the center pile. The player with the most FINGER cards in their winnings pile is the winner!

You are a Liar

You Are a Liar