Players take turns placing one of their Yikerz pieces on the game board. The first player to get rid of all their Yikerz wins.

Arrange the four game board triangles into a desired layout.

One player shuffles and divides the Yikerz into separate, even stacks for each player. Any leftover Yikerz are placed back in the pouch.

The player who shuffles the Yikerz is the first to place their piece on the board in that round.

The losing player of each subsequent round selects the next board layout. This player also shuffles the pieces, divides the pieces into stacks and is first to place a Yiker on the board.

The four-piece game board can be arranged to suit a variety of player skill levels. Try different arrangements-any layout is legal as long as each board piece is touching another piece by its side or corners.

A player selects one of the Yikerz from their stack and places it onto the board with one hand.

If any pieces on the board collapse together during a player's turn, that player must remove all of the collapsed pieces from the board and add them to their stack.

A player's turn ends 10 seconds after a player places their piece or removes any collapsed Yikerz OR when the next player has moved their Yiker toward the board to make their move.

When a player is down to their last piece, they must say "Last Yiker" or "Last Piece" out loud to the other players. If the player fails do so before the next player begins their turn, the player must take two pieces off the board and add them to their stack.

(If this action causes a collapse, the player must take the collapsed Yikerz as well!)

When 10 seconds have elapsed without a collapse after a player has placed their last Yiker on the board, the round is over and that player wins the round.


If the game ends with a tie between two or more players, the tied players take part in a sudden death round. In sudden death, players are eliminated as soon as they cause a collapse. The last player left wins the game.

Try to place your Yikerz in positions to create open spots for you to use later on. At the same, try to set up traps for your opponents to fall into.

It is legal - and often necessary - to use a Yiker's magnetic force to topple or move pieces already on the board. A player may take all the time they need to manipulate the magnets on the board to suit their playing strategy.

As the board begins to fill up, it will become necessary to move Yikerz to make room to place new pieces.

Players are encouraged to place pieces upright where possible. This makes the playing field more challenging and dangerous for opponents. However, beware: traps set for an opponent can quickly backfire. 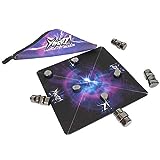 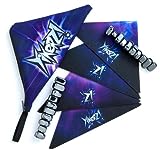