Let the five dice fly to achieve the best scoring combination and win the corresponding chip. There are only 4 chips of each kind. Try to get the best chips before they run out.

Be sure to check out the various bonuses available to get extra points! Strategic choices and lucky dice will roll you to a win!

Have the highest score at the end of the game.

Place the 28 chips in their corresponding spaces, four chips per slot. Players throw one die to determine who begins the game (highest roll starts).

Once the first player is determined, play goes clockwise.

Four dice following each other.

All the dice have the same color.

Three-of-a-kind and a pair.

Five dice following each other.

Choose the chip you want and play again.

There are only 4 chips of each kind. Grab the best ones before they run out!

Only a Yamslam roll can be used to collect a chip from the discard pile.

Important: Players have to line up their chips in numerical order in front of them.

The game ends when the last chip is taken from the rack.


Then total the points of your chips. Add any achieved bonus to your chip total.

The player with the highest total wins the game.

Grab a pen. Total the score of each player at the end of each game. Set a number of games you would like to play beforehand, the player with the highest score wins!

In a four-player game, it is always fun to play in teams of two. One player of each team collects the chips for the team. Players from each team alternate play. 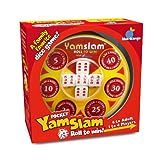 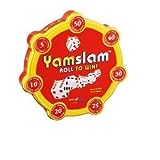