Be the first worm to reach the finish line.

Each die gives you five options for advancing your worm-4, 5, 6, 7, and X. The X allows you to advance any number of segments you choose provided that number (4, 5, 6, 7) has not been bid by another player.

If all numbers have been bid by the other players, the X bidder does not move on this turn.

However, bidding an X also allows you to move one of the finish line posts thereby changing or extending the course.

Each player selects a numbered die face and places it (hidden!) in front of him (see below). When all players have made their bid, the dice faces are revealed simultaneously. The player with the lowest bid starts the round, followed by the second-lowest, and so on.

If 2 or more players bid the same number or X, their bids are invalid and their worms don't advance. Only those bids that are unique-not bid by another player allow players to successfully move their worm.

Once made, successful bids cannot be repeated for one round. The subsequent bid is made from the players' remaining numbers.

When the next round is finished and the worms are moved, that number can, once again, be bid in the following round. This applies only to successful bids (e.g. if 2 players each bid 7, canceling each other out, they are free to bid 7 again the next time).

Movement consists of taking the last worm segment and moving it up to the front (usually) and repeating this action until the worm has advanced the number of segments on the chosen die face.

If a worm is blocked, it may move "backwards". Worms may bend in any direction in order to block other worms, but they may not split.

Worms may not touch each other.

If a player bids X, he may choose to move one of the finish line goal posts as well as advancing his worm. The finish line is moved by placing a finger on one of the 2 posts to keep it stationary and moving the second post.

This changes the orientation of the line and may thwart your opponents.

The race ends when one player's worm touches the finish line. 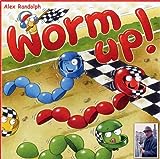 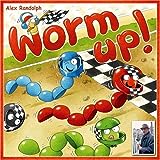