Race to get the most points by forming words using a combination of your consonant cards and the vowels rolled on the dice!

Deal five cards to each player. Place the remaining deck face down in the center of the playing surface.

A Word to the Wise

The player with the first word in the previous round starts the next round.

All words are valid except:

A word must be at least two letters long.

Use a dictionary for validation.

Players add their points each round. All vowels are worth one point. The WILD side has no point value.

The first player to place and state a word of three or more letters in each round gets three bonus points. Two-letter words get no bonus points.

Players using all five cards in their hand get ten bonus points.

The last player to make a word cannot play a word and receives only one point for that round.

At the end of the game, deduct the remaining points in a player's hand from that player's total score. 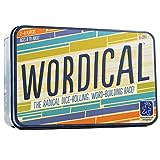