Welcome to Word Wave, the pulse-pounding word game that challenges you to create words as fast as the Word Wave can launch letters.

Grab letter tiles to make words, or steal other players' words by adding letters to them. You'll have to think fast, spell faster, and then get ready to catch the next wave of words!

Score the most points by making words with the waves of letter tiles that pour out of the Word Wave.

Slide the Game Mode switch to the desired setting. After five seconds, letter tiles will begin to slide out of the Word Wave onto the table.

There are no turns in Word Wave! Everyone plays at the same time, so you'll have to be quick to spot and grab words as you see them.

As the letters pour out, keep your eyes peeled. If you see a word, shout it out then grab the tiles that spell it.

So if you see C-A-T, you would shout "Cat!" and place the three letter tiles in front of you, spelling the word.

A single game of Word Wave will take less than ten minutes. If you'd like to play a more competitive game, we recommend that you play multiple rounds.

Write down player's scores at the end of each round. The first player to reach 100 points wins the game.

Play on until the last wave of letters has washed out of the Word Wave. After the last letter is launched, the Word Wave will run for another 60 seconds, then turn itself off.

Keep using the letters on the table and your opponents' words to make new words. When the Word Wave turns itself off, the game is over and it's time to start scoring!

You score points for every word that you have created, as shown below:

The player with the highest total score wins. 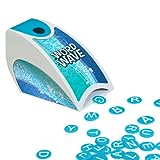