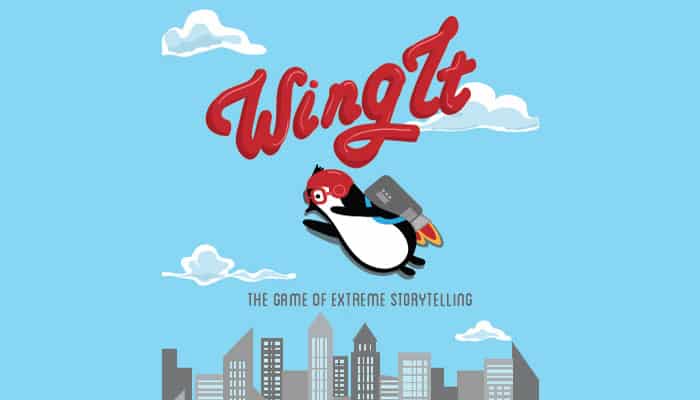 What you see before you is a storytelling and problem-solving game. In each round, the players are all presented with the same challenging situation, but each has different resources to resolve the situation.

Though only one player wins each round, the real fun is in the stories!

Two decks of cards are shuffled and placed facedown on the table: the Object deck (small cards) and the Situation deck (large cards). Everyone draws a hand of five Object cards from the deck. Players look at their cards but conceal them from the other players.

One player is chosen to be the Judge for the first round. (Players may choose the first Judge however they want: for example, craziest outdoor adventure experience). The other players are Storytellers.

The Judge draws a card from the Situation deck and reads it aloud before placing it faceup in the middle. Each Storyteller silently imagines being in the Situation described by the Judge, and thinks of a way to resolve the situation using exactly three of their Objects.

Players may reread the Situation card. Players show that they are ready to share their stories by laying down the three Objects they plan to use facedown on the table.

When everyone is ready, the Storyteller to the left of the Judge describes their plan to resolve the challenge in the Situation using only three Objects. (Storytellers may describe how they came into possession of these Objects or may simply assume that they happen to have these Objects on hand).

While telling their story, Storytellers place each Object face-up in front of them, revealing each as it appears in the story.

When this Storyteller has finished, the other Storytellers take turns doing the same. Turns proceed clockwise around the circle until all Storytellers have shared their stories.

When everyone has finished, the Judge shares (constructive) opinions about the stories and chooses a winner for the round. Judging is completely subjective, and may take into account any or all of the following:

The winner keeps the Situation card.

Storytellers discard the three cards they used face-up in a discard pile to the side of the Objects deck and draw three new objects to add to their hands. A new round begins, and the player to the Judge's left becomes the Judge.

The winner of the game is the player who first collects 3 Situation cards OR until everyone has had 2 turns. But the fun doesn't have to stop there -- you can play for as long as you want!

Planning time limit: After reading the Situation, the Judge starts a timer for 1 minute. When the timer runs out, the player to the Judge's left must begin telling his story. Players may find that less time is necessary in later rounds.


Storytelling time limit: When each player starts telling his story, the Judge starts a one-minute timer. The player must finish his story before the timer runs out. This is useful for those times when your friends could go on for half an hour with their stories!


Trade-in: After each round, each player may turn in anywhere from one card up to three cards at the beginning of the next round, meaning before the situation is said. Cards traded in are placed on the bottom of the Object deck.

Pass the card: At the beginning of each round, after each player has 5 cards, but before a Situation card is chosen, each player chooses one card from their own hand and passes it to the player to their left. Each player must use the new card as one of the three Object cards in their story.


Create your own cards: Before playing, write new objects and situations on the blank cards provided and shuffle them into the deck.


On the fly: Instead of choosing a Situation from the deck, the judge makes up a situation on the spot.