Each player should choose a faction and a color, taking the matching cards, miniatures, bases and crystal shards. Choose which map you want to play on. If this is your first game, we recommend the dungeon.

Once you've chosen your faction, clip the colored bases onto your miniatures. Put your character cards and faction card face up in front of you, and place each miniature on the corresponding character card.

Shuffle your action cards and place them face down as a personal action deck.

Shuffle the map cards, and deal ten to each player. Each map card has a number which matches a space on the board. Choose one card for each character by placing it face down on that character card.

This is the space where that character will first appear. You may check these at any point, but must keep them secret from the other players until your characters are revealed.

Once everyone has assigned a map card to each character, pass the five remaining cards to the player on your right. Place your shards on the map spaces matching the cards you are given, then remove those cards from the game.

Tip: make sure the cards you give to the other player means their crystal shards end up in hard-to-reach spaces, and consider placing your characters in spaces where you can set up an ambush.

Once everyone has placed their shards, draw seven cards from your action deck to form a hand. The player whose shard is on the lowest-numbered space goes first, and takes the active player token.

On most turns in a game of Wildlands, you will reveal one character, take as many card actions as you like, and then draw three cards. The player to your left will then begin their turn.

Each crystal shard you claim is worth one point, and each enemy character you knock out is also worth one point. The first player to collect five points wins.

If you have one or more characters still on their character cards at the start of your turn, you must reveal at least one.

To reveal a character, flip over its assigned map card, and place the miniature on the matching board space. Remove that map card from the game. You may reveal more characters at any point should you wish.

Tip: You cannot be interrupted directly after revealing a character.

On your turn you may play as many action cards from your hand as you like, one at a time (unless you're climbing to high ground or collecting a shard). Each action card has multiple ways it can be used. When playing the card, you select one option, and forgo the chance to use the others.

After you perform an action, leave a small pause to give other players the opportunity to play an interrupt card.

You can only take actions using characters who are on the board. If you wish to take an action using a character who is not yet on the board, you must reveal them first, then take the action.

Place your used action cards in a personal discard pile. If your deck ever runs out of action cards, shuffle up your discarded cards to form a new deck.

You can take these actions with a character whose icon is on a card, regardless of any action flag beside it. Remember that, by choosing to take a default or flag action, you are forgoing the chance to take any other action with that card.

Movement is the default action of a card. If a character's icon is on an action card, you may always use the card to move that character. One card will move a character to an adjacent space.

There is no limit to the number of characters that can occupy a space, and other characters do not affect your movement. You can move between spaces separated by white lines; you cannot move through walls.

If you are playing in the dungeon, you may ignore the climb rule for now.

If a white line is marked with an arrow, that represents high ground, which you need to climb to access. To move a character in the direction of the arrow you must play two cards which allow movement for that character.

Note: You may use a wild movement instead of a normal movement at any point.

You can only claim crystal shards of your own color. To claim one of your shards you must have a character in the same space as that token. You must then play three cards displaying that character's icon as a single action.

When you claim a shard, place it in front of you as one point. You can claim a shard even if there is an enemy character in the same space.

Flag actions are usually connected to a character icon. You can always use a character's flag action instead of a default action. Flags are grouped by color: melee (red), ranged (blue), defense (green), and maneuvers (yellow).

At the bottom of some cards are open actions, which are not associated with a particular character symbol. Any single revealed character may take that action, in defense or attack, instead of the other options on the card. This cannot be used to take a default action.

Each faction's action deck has a number of special 'wild' action cards. All wild cards are identical, and each can be used to perform one of these three actions.

This can be used as though it shows every character icon from your faction. As such, you may move any of your characters one space. This can be used to pay the additional cost for climbing.

Immediately draw two action cards. If this would bring you above seven cards, you instead only draw one action card.

You may play this card out of turn immediately after another player takes an action, and declare an interrupt. The other player must finish their action (if they have not already done so), then you can play as many of your cards as you like, one at a time, as if it was your turn. You may choose to reveal characters at this point should you wish.

The interrupting player can also be interrupted! Once whichever player interrupted last is finished, play returns directly to the active player - any players who have previously interrupted do not get to play additional cards. You do not get to draw cards when you are finished with an interrupt.

You cannot interrupt immediately after a character has been revealed or a different interrupt has been played. You must always let that player take at least one other action. Remember that sometimes multiple cards can count as one action, such as when a character is climbing, or defends against an attack.

However, if another player declares the end of their turn, you may interrupt immediately, before they pass the active player marker and draw three cards. Once play returns, that player may choose to take further actions before once again declaring end of turn.

To make sure other players have a clear opportunity to interrupt, you should mentally count to three between each action. Never declare multiple actions at once.

This is particularly true if you enter a space containing an enemy character, or if someone defends against your attack. In these situations, it is often worth asking the other players if any player wishes to interrupt.

If multiple players wish to interrupt at the same time, the player closest in turn order to the active player interrupts first. Other players must then let that player take at least one other action before deciding whether to interrupt them.

Most play groups can agree on a fair amount of time for interruptions.

If your play group is having trouble leaving time to interrupt, try the following when taking an action: declare the action you're taking; place the card on the table; take the action; put the card in the discard pile.

Once the card is in the discard pile, the time to declare an interrupt has passed.

Once you want to stop playing cards and revealing characters, you may declare that you are ending your turn. You will now draw three new cards from your action deck, regardless of how many cards you played this turn.

If this would bring your hand to more than seven cards, you instead only draw until you have seven, then stop. Pass the active player marker to the player on your left, who then begins their turn.

Note: You might get interrupted after you declare the end of your turn, but before you draw cards! After the interrupting player is finished, you can decide whether to draw cards or continue playing.

As soon as one player has five points in front of them, in the form of crystal shards, knocked-out enemy characters or any combination of both, the game immediately ends and that player wins.

Note: The number of points you have should always be visible to the other players. 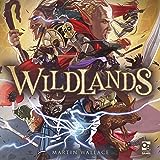