To be the first player to find your object in Ned's Head.

Place all the silly things in Ned's Head and place Ned in the center of the playing area. Each player should be in a position to be able to reach into Ned's Head easily.

Make sure that there is a card for each item placed in Ned's Head. Shuffle the cards and place them in a pile face down, near the play area.

Each player is dealt one card from the stack. Don't let anyone else see your card! Each card has a picture of a silly thing on it. You must find the silly thing pictured on your card inside Ned's Head.

When all players have looked at their card, they say ''ready" and then together they yell "What's in Ned's Head!" All players immediately put one of their hands into a nostril or ear closest to them and try to feel around inside Ned's Head to find their object. No peeking!

Pulling out the wrong item

If a player pulls out the wrong silly thing, then he must hold onto it and wait until each player has had a chance to pull out a silly thing. Then the player who chose wrong must place his silly thing back into Ned's Head.

If none of the players were able to find their silly thing, then Ned is declared the winner! All players replace their wrong silly things back into Ned's Head and play the game again.

Another way to play: For longer game play, players may play in rounds. When a player is the first to find the correct silly thing, he gets to keep his card and a new round begins. The player to collect the most cards (i.e. win the most rounds) wins the game!

Add to the objects in Ned's Head and make your own cards!

Add more fun to Ned's Head by finding your own silly objects to add to his head. Look around, you'll be surprised at what you can find to put in his head. Look for fun objects that are different textures and shapes.

It's easy to clean Ned's silly objects. Simply wash each item gently in mild soap and water. Rinse and layout to air dry. Ned's Head may be spot cleaned with a damp cloth and mild soap. Do not attempt to launder Ned's Head.

Folding up Ned's Head It's fun to leave Ned out of his box. You can stash secret stuff inside him or just keep him out as a fun room decoration! But if you want to put him back in the box, here is how:

Grip the rod at Ned's eyes in one hand and the rod at one of Ned's ears in your other hand. Then turn Ned on his side and push to flatten him.

Fold Ned's big nose in towards the rest of his head.

Slide Ned's Head into the box before you let go of him. He'll pop out when you're ready to play again!

When a player thinks that he has found the silly thing that is on his card, he may pull it out to look and see. If it is a match to the picture on his card, he wins the game!

If two or more players pull out the correct match to their card, the player who found the correct silly thing first is the winner. 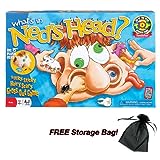 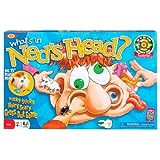