What is the hilarious party game of who-said-what. Players are asked to create responses to humorous questions and situations, and everyone must guess who wrote what.

Just remember, there is no need to be truthful when answering questions. With players trying to come up with the most comical and outrageous answers possible, WHAT is absolutely the funniest game you will ever play.

WHAT is a perfect game for get-togethers and parties with big groups of people, and can be played with 5 to 17 players.

Category is the general category of WHAT with short snappy questions that always begin with "What"?

Category 2 is the personal category of WHAT where the questioner fills in the _______ with someone's name. It can be someone playing the game, someone famous, or anyone else for that matter... it's up to the questioner to choose.

Category 3 is the sticky situation category of WHAT where players are faced with predicaments that always end up asking "What do you do?"

Note: when playing the personal questions (Category 2) with people you know well, it is generally more fun to use people who are playing the game with you.

However, when playing with people you don't know so well, it is often better to use famous people everyone would know.

These numbers indicate the question category for each round. 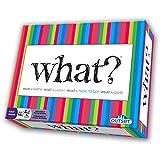