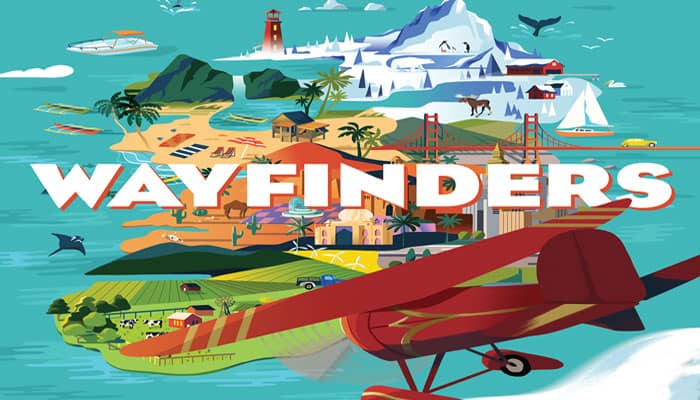 Engines purring, goggles down-the seaplane is set for take-off! Welcome to the whimsical world of Wayfinders, where intrepid explorers race to chart new paths through the skies.

You will need to think on your feet and outfit your planes with the right gear to arrive safely. But building hangars on islands and stocking them with parts can help you zip around with ease!

Be sure to be keen in your planning and you will unlock the charms of the islands. Wheels up-adventure awaits!

In Wayfinders, you must collect resources and fly to different islands to build Airstrips.

At the end of the game, you will score all islands where you have built Airstrips, some of which provide unique Scoring Effects. The player with the most points wins.

On your turn, choose 1 of the following actions:


A. Action: Placing a Worker

Place 1 of your available workers on an open space at a Hangar of your choice on the Hangar Board.

Each player may have up to 3 workers at a single Hangar. If there are already 3 of your workers at a Hangar, you may not place a new worker there. Otherwise, there is no limit to the total number of workers that may be placed at a Hangar.

If all 5 of your workers are already on the board, you may not take this action. (You must instead return your workers).

After placing a worker, your turn ends.

Example: On her turn, Lucy decides to place a worker at Hangar #2. She places it below the other two workers that are there (one of her own and one of her opponent's). Her turn is now over.

When you return workers, follow these steps in order:

First, collect 1 resource per worker from each Hangar where you have workers. You must always take resources from a Hangar in order, starting from the top of the column to the bottom. (It doesn't matter what order your workers were placed in!)

In this case you collect no resources, but may still perform the remaining steps, such as moving your Airplane.

She then takes all 4 workers back and proceeds to the next step of her action.

After returning your workers, you may spend resources to move your Airplane and/or build Airstrips.

Whenever you spend resources, you may spend 2 of the same resource as any 1 resource.

Example: After moving her Airplane, Lucy decides to spend 1 tire, 1 propeller, and 1 headphones to place an Airstrip on a Tropical Island.

Because no other player has an Airstrip there, she returns these resources to the bag and places her cube on the "#1" space on the island.

The island has an immediate effect that rewards her with 2 random resources from the bag, so she draws these now. She will also score 4 points at the end of the game for building an Airstrip here.


Step 3: Discard Down to 3 Resources

After you finish moving your Airplane and building Airstrips, if you have more than 3 resources remaining, you must return all but 3 of them to the resource bag.

Note that this is the only time you must discard down to 3 resources. You do not have to discard down on other players' turns, or when you place a worker.

Step 4: Refill the Hangar Board

If there are any resources remaining in the Hangars you collected from, move them to the top of the column. Then refill all of the Hangars with resources from the bag.

Note it is important to do this at the end of your action, as any resources you discard must go back in the bag before refilling the Hangar Board.

When any player has 2 or fewer unplaced Airstrips at the end of their turn (i.e. they have placed 8 or more Airstrips on the board), this triggers the final round of the game.

Players complete the final round of turns, ending with the last player in turn order. As a reminder, you can tell the player order by looking at the Home Island and the order of the airstrips placed there during set up.

Each player also scores 1 point for each leftover resource they have and each of their workers on the Hangar Board.

When you build an Airstrip on an island, you may gain a Resource Effect (red-backed tiles), Scoring Effect (blue-backed tiles), or Permanent Effect (yellow-backed tiles). All tiles are worth points at the end of the game.

When you place an Airstrip here, immediately draw the indicated number of resources from the bag. You may spend them right away!

Each island with a Scoring Effect is worth a variable number of points, which is always evaluated at the end of the game.

When you place an Airstrip here, you gain this effect for the rest of the game.

More experienced players may want to switch things up by varying the numbers of each category of islands in the game.

You can add more blue or yellow islands, choose islands completely at random, or create fixed layouts with islands you want to use. Make sure to share your favorite layouts with us!

When setting up the game, place all island tiles around the Home Island face-down. Then reveal only the 4 tiles that are orthogonally adjacent to the Home Island.

When you move your Airplane to a new island, flip all orthogonally adjacent tiles face-up. Once an island is face-up, you may move to that island and build an Airstrip there normally. 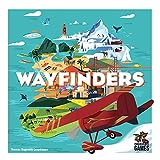