Wavelength is all about wildly creative clues. So we tried to give players as much freedom as possible to do that.

These rules are here only to restrict clue giving methods that frequently broke the game-feel free to adapt them to whatever works best for you and your friends. And if you do, please share them with us!

These rules aren't 1OO% necessary, but we've found that they improve the spirit of play, especially if players start bending the rules in ways that make the game less fun. 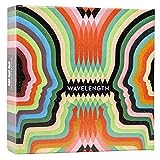