To be the first player to build a complete, leak-free, pipeline from your valve card to your spout card.

The number of pipe cards you need to place in between them (but not including them) varies by the number of players:

Each player places his or her valve card face up, in a vertical position, and to his or her right on the playing surface.

Shuffle the deck and deal 5 cards to each player, face down. Place the remainder in a face-down stack in the center of the playing surface. This is the "draw" pile.

Select a player who will play first. Play passes to the left. Always begin your turn by drawing the top card from the draw pile. Now, you may make any ONE of the following plays, using the six cards in hand:

All cards must be placed VERTICALLY and only so that the pipes properly join together.

Cards may be turned around as long as they remain vertical. Once placed a card may not be moved. No card may be placed in such a way that it completely blocks a pipeline from continuing.

You can't build your pipeline beyond the edge of the table you're playing on or over an opponent's pipeline. So be sure to play on a big enough table and allow plenty of room between valves when you start to play.

Remember: You can't make copper pipes leak, only iron pipes. If placed after the last pipe card, the pipe can be of any shape, provided it continues the pipeline according to the rules above.

No more than one leaky pipe or cap can be part of a player's pipeline at any time. Once a leaky pipe has been repaired, it may not be made to leak again. Also, you may not play a good pipe on an opponent's pipeline.

A leaky pipe may be repaired in either of two ways:

A "T" pipe makes it possible for water to flow in two directions in a pipeline. A player must cap one of these directions before he can win the game as water must flow only from the valve to the spout (with no leaks or any second open sections of the pipeline).

It is best to hold onto a good "T" card to place on a leaky "T" played on your pipeline by an opponent. (Of course, it also makes sense to place a leaky "T" on an opponent when the opportunity is right).

A "CAP" card has 4 caps on it. Some may be copper, some iron and some may be leaky. It is best to cap one of the open ends of a "T" on your pipeline as soon as possible, other-wise an opponent could cap your longer section of pipe and ruin many turns' worth of your careful pipe building, as in this example.

When placing a cap card, those caps not connecting to a pipe are simply ignored. If the connected cap is leaky, you have to repair it, not the other caps on the card. A cap card may not be counted as part of the total pipeline for purposes of winning the game.

How to add a Spout

Your spout must point away and down from your faucet.

Play continues, turn by turn, until one player succeeds in placing at least the required number of pipe cards from his or her valve to permit him or her to win by placing the spout.

Sometimes twists and turns in a pipeline will require more than the minimum number of pipe cards to be placed before a player can win.

As soon as you have played the required number of cards in one continuous line, you may add your spout card to the end of this line on the same turn and win the game! Make sure the spout is pouring left and down (not up and right). 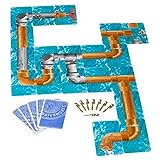