In June 1972, five men are arrested in Washington's Watergate Building. What looks like a third-rate burglary attempt on the headquarters of the Democratic National Committee induces journalists Bob Woodward and Carl Bernstein of the Washington Post to start a thorough investigation.

Over the following two years, they discover that the five men were directed from within the White House to spy on political opponents. As a consequence, in 1974 President Richard Nixon resigns from office to avoid impeachment.

In WATERGATE, one player assumes the role of a Newspaper Editor, while the other embodies the Nixon Administration - each with a unique set of cards.

To win, the Nixon Administration must build up enough momentum to make it to the end of the term, whereas the Editor must gather enough evidence to connect two informants directly to the President.

Of course, the administration will do all in its power to smother that evidence. Can the secret source known as "Deep Throat" tip the scales? A thrilling race against time begins...

Watergate is played over a series of rounds. Each round comprises the following 3 phases:

The game ends immediately with a win for Nixon if: Nixon has managed to place a total of 5 momentum tokens on their momentum card.

The game ends immediately with a win for the Editor if: At least 2 informants (face-up picture tiles) on the evidence board are connected via face- up evidence tokens to Nixon's picture in the center.

Carry out the following 2 steps:

Starting with the player who has the initiative (the player that the arrows on the initiative card are pointing towards), the two of you take alternating turns until neither of you has any cards left in hand.

On your turn, you must play ONE card from your hand.

Each card consists of two parts:

Of these two parts, you must choose ONE to use.

Note: Each card also shows a quote at the bottom that has no relevance to the gameplay.

If you choose to use the value part, move 1 token on the research track as many spaces towards your side as that value states (1 to 4).|

You can choose either the initiative token

, or an evidence token.

If you move an evidence token, bear the following rules in mind:

There are 3 basic types of evidence token, each with a specific color:

There are also two-colored evidence that can be used as either of their tokens colors.

When you use the value part of your card to move an evidence token, it must be a token of the color shown on that card A or a two-colored evidence token that includes that color.

If your card shows a joker (with all 3 colors) B, you can move 1 evidence token of any color.

To move a face-down evidence token, also note the following:

Important: After you use a card's value part, discard it face up to your personal discard pile. (If it is your first discarded card, place it face up beside your draw deck to create your,discard pile).

Moving a token to space 5 on your side:

Whenever you manage to move a token to space 5 on your side of the research track, any extra steps are forfeited and you gain that token immediately.

If you gain a token this way, follow the instructions in the green box of that token's type.

Attention: As soon as a token has been gained, it is gone from the research track and thus can't be moved anymore.

If you choose to use the action part of your card, follow the printed instructions.

Important: When following a card's instructions, you have to fully carry out all instructions that are possible. Instructions that cannot be carried out (because, for example, a token that you are supposed to move is not present) can be ignored.

Some of the most common instructions

At any time, both of you may look at face-down evidence tokens that are already on the evidence board.

At any time, both of you may look at the cards of either discard pile and any cards already removed from the game (but never those of the face-down draw decks).

Once neither player has any cards left in hand, carry out the evaluation phase by following these 5 steps in order:

If there are any evidence tokens left on the 0 space of the research track (face up or face down), return them to the bag.

Give the initiative token to the player whose side of the research track it's on.

If the initiative token was gained earlier this round, skip this step.

Give this round's momentum token to the player whose side of the research track it's on.

When you gain this round's momentum token, take it from the research track and place it onto your momentum card on the empty space with the lowest number. If there is an instruction text next to that space, carry it out now.

If the momentum token is on the 0 space of the research track, it is not gained by either player but returned to the supply instead.

If the momentum token was gained earlier this round (see page 6), skip this step.

4. Place the initiative token and 1 new momentum token onto the 0 space

Then take 1 momentum token from the supply and also place it onto the 0 space of the research track. If you can't do so because the: is none left in the supply, Nixon wins the game immediately.

Pinning an evidence token to the evidence board

Whenever you gain an evidence token (or are instructed by a card to pin one to the evidence board), place it onto any empty evidence space that is marked with a slip of that token's color (or - in the case of a two-colored token - one of its two colors).

Attention: If the evidence token shows this symbol

also move the momentum token on the research track 1 space towards your side.

If no player has won the game yet (see below), start a new round.

The game ends immediately with a win for Nixon:

The game ends immediately with a win for the Editor:

as soon as the Editor has connected Nixon to at least 2 informants on the evidence board.

An informant is considered connected to Nixon if a thread coming from that informant's face-up picture tile runs all the way through face- up evidence tokens to Nixon's picture in the center (empty spaces and face-down evidence tokens disrupt connections). 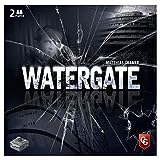