Every 100 moons, members from different tribes gather to sculpt new totems. The totems they create represent the values of their family , village, courage and culture . The tribe that makes the most prestigious totem poles wins the contest...

Build the 3 most prestigious totem poles.

Each player takes his 3 headdresses (Wings or Crests). Shuffle the 8 village tiles and put 2 of them randomly back in the box without looking at them.

Put the remaining 6 village tiles in a line, face-up, one by one, between the two players. Turn the last three village tiles 90 degrees to signify they are not yet available to build Totems on.

Place the 21 totems in the bag.

The last player to utter a war cry begins the game. Players play one at a time.

On your turn, you must:

Then it is the next player's turn.

Note: You are not allowed to pass.

The game ends when all 6 totem poles have been finished. Each player scores points for all of their totems, based on the village tiles their totems were built on. That means that each village will give you points for the elements belonging to ALL the totem poles you control.

Then players subtract 1 point for each sun on their totem poles (unless they have the Sun Village Tile).

The winner is the player with the most points. In case of a tie, the player who placed his third headdress first wins the game.

The boldest players may decide not to reveal the villages to come. So they keep the three unavailable village tiles facedown.

Reveal them only when one of the three available villages has completed its totem pole. 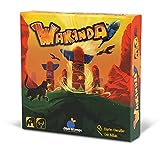