Individual Components For The Players

Rome needs a connection to Brundisium, and the players have been tasked with building the Via Appia in order to allow for fast travel between the two cities. To create the road, they'll need to break off stone tiles in the

quarry, then travel to Brundisium, laying out the tiles and creating the path that all will follow in the years ahead. This travel costs sesterces, but will bring crucial victory points and glory from Rome in return.

Place the game board in the center of the playing area.

Always keep sesterces hidden behind your screen, while placing stones in front of your screen for all to see.

Players take their turns in clockwise direction. During his turn, the active player performs one of the following actions: The actions in detail:

The player chooses one of the face-up income cards and receives either the number of sesterces (from the general supply) or stones (from the stones storage) as shown. He keeps the sesterces behind his screen and the stones in front of it. Then, he flips the income card face down.

When only 3 or fewer cards remain, the player receives both sesterces and stones. In addition, the player who takes the final card receives a "push +1" token, provided he doesn't already have one.

After the last card has been flipped, draw 7 new cards from the pile and reveal them next to the game board. Then, shuf- fle the face-down cards and all income cards in the pile to form a new draw pile. If a player is entitled to receive a stone that is no longer available in the storage, all players must return half the amount (rounded down) of their stones of this size to the storage. Then the player receives his stone(s).

Note: This means that each player may not own more than one "push +1" token at any time.

The player may push up to 2 of his stones into the quar- ry, one after the other. The player places the first stone behind the quarry, as shown in the example at right, and subsequently pushes it into the quarry, using the pusher. He may use the pusher at any angle he wants, but no part of the pusher may cross the line between the two bars. The second stone, if any, is pushed into the quarry the same way.

The player exchanges each stone that drops off the quarry on the other side for a tile of the same size or smaller, taken from the tiles storage, or he may sell it immediately for one sesterce. Return the stones to the stones storage after they have been exchanged or sold.

The player must load any tiles he has received onto his cart, matching the cart's appropriate spaces exactly. If the player pushed 2 stones into the quarry, but no stones fell off, he still receives one small tile or one sesterce. If the player owns a "push +1" token, he may use it now and push a third stone into the quarry.

Place the stone you want to push into the quarry behind the dotted red line, marked in this example. When pushing, no part of the pusher may cross this line.

Note: This space of the cart can contain either one large tile or one mid-sized and one small tile. You cannot load two small tiles here! Of course you may also load a single mid-sized or small tile here.

The player adds 1 or 2 tiles to the Via Appia, minding the following rules:

The active player receives a bonus token of that road segment for each tile he added to that segment, in addition to the victory points shown below:

Example: Ani (blue) and Frank (red) have travelled to Tarracina and thus may do road construction work both in segment A and in segment B of the Via Appia.

The player piece may move only on or over spaces covered with a tile. Furthermore, the piece may only move along connecting lines between the tiles.

A player can move no further than the next city, where he must stop and receive the city's topmost remaining victory point token. Additionally, he must place a city marker on the city marker space. (The last player to reach this city skips this action).

Note: You may never enter a space not covered by a tile!

Example: There is one city marker in Benvenutum. Thus, moving 1 tile forward is free for players in segment B, moving 2 tiles forward costs them 2 sesterces, and moving forward 3 tiles costs 5 sesterces. This marker does not affect segment A.


End Of The Game And Final Scoring

In both cases the full game round is played, ensuring that all players have had the same number of turns. 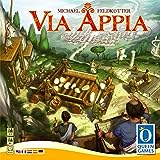