The game is played in turns. Each turn, each player chooses an action to take, most often bidding for and purchasing a tile.

Tiles represent various rooms, locations, and gaming stations that you can put in your hotel-casino. They add to your Population, Revenue, and/or Fame total. Population and Revenue help you collect more income each turn, and Fame adds to your victory points.

You can earn additional Fame at the end of the game by carefully placing the tiles on your hotel-casino sheet when you acquire them, such as by connecting your hotel entrance to your casino entrance or creating diamond patterns at tile intersections.

The player with the most Fame at the end of the game wins.

When a premier tile goes up for auction, put a Minimum- Bid marker on the matching space of its bidding track.

This represents the number of patrons you can comfortably accommodate in your hotel-casino, based largely on the food services you offer.

This shows the amount of money you can potentially earn, given enough patrons.

The player with the most Fame at the end of the game wins.

Fit tiles with these symbols together to create diamond or partial diamond shapes, earning you bonus Fame at the end of the game.

Each turn, do the following in order:

Skip this step on the first turn.

The first player (the player with the Turn Order Button) starts each turn by dropping the prices of each premier tile on the game board.

To do so, move the Minimum-Bid marker for each premier tile on the board to the next-lower circular space (skipping the next-lower square space). For example, lower a marker that's on 18 to 12, not to 15.

If you lower the marker from the "3" space, remove the tile on that space from the game.

For a 3-player game, leave the space marked "4-5 Players Only" empty for the entire game.

In all other cases, fill an empty premier space on the game board by drawing 1 card from the Event deck. Then, follow the instructions on that card, completing any actions it says to take.

If an Event card says you can't bid on a certain type of tile or take a particular action this turn, put a No-Bid marker on the affected tiles or action as a reminder. If you can't complete an action immediately, leave the card in play until you can complete it.

After you've completed the Event card action, look at the symbol in the center of the card.

Flip the top tile of the premier stack indicated by the symbol and fill an empty premier space with it. Then put a Minimum-Bid marker on the circular bidding- track number that matches the starting- bid price of the newly placed tile.

Repeat the tile-flipping process for each empty premier space. Discard completed Event cards face up next to the deck.

If you can't replace a tile because no tiles of the indicated stack remain, then the game ends.

The banker gives each player an amount of money chips equal to the lesser of that player's Population and Revenue numbers ($5 to start).

How much money a player has is public knowledge.

Some Event cards have special rules that override the general rules.

Starting with the player with the Turn Order Button, each player in clockwise order chooses one of the following actions:

Once you've chosen an action, you can't change that action unless you are outbid for a tile.

To bid on a tile, put your Bid marker on the bidding-track space that shows the amount of money you want to bid for that tile.

Green bids 25 for a premier tile. Yellow outbids Green with a bid of 29. Green has to wait until his turn in the player order before he can bid again or choose a new action.

Each time you are outbid on a tile, you must wait for your turn to come up again in the player order. Then you pick up your Bid marker and choose an action again (including bidding higher for the tile you were outbid on, if you want).

Bidding is complete once each player has taken an action and no players have been outbid for a tile.

The second bidding track for Slots is used only in a 5-player game. The two tracks are independent of each other and bids are made separately on them, making it possible for two players to purchase a Slots tile in a turn.

Once bidding is completed, each player with a bid on a tile pays the bank the amount of the bid, then either places the tile on his or her hotel-casino sheet, or puts it to the side for later placement. There's no limit to the number of tiles a player can have off to the side.

If you purchase a tile but don't place it (because you choose not to or you don't meet the prerequisites for it), you may instead place a tile onto your sheet that you had earlier put off to the side.

Tiles must be placed as follows:

The Fancy Restaurant can't go next to the Lounge. It must be connected to the blue (hotel) entrance by an uninterrupted path of tiles without passing through any tile walls.

The Night Club tiles have special placement requirements. In addition to the prerequisites listed above, a Night Club tile must be placed so that one of its entrances connects to a Lounge or Fancy Lounge entrance.

Once you place a tile on your hotel-casino sheet, you can't remove it or rearrange it in any way unless you later take the Renovate action.

To take the Renovate action, put your Bid marker on the Renovate space on the game board. Any number of players may choose to renovate on any given turn.

Example: You renovate and take a Lounge off your hotel-casino sheet. You then return the Lounge to your sheet and also put a Night Club on your sheet that you had purchased on a previous turn but didn't want to place yet.

To take the Publicity action, put your Bid marker on the Publicity space on the game board. Any number of players may choose to publicize on any given turn.

When you publicize, you immediately gain 1 Fame, plus you may put 1 tile you own that's off your hotel-casino sheet onto your sheet.

For example, if you purchased a tile on a previous turn but couldn't place it at that time because you didn't meet the tile's prerequisites, you could place it later when taking the Publicity action as long as you then have the prerequisite tile or tiles on your sheet.

After you renovate or place a tile, add any Fame, Revenue, or Population bonuses given by newly placed tiles to the appropriate tracks. You track your Fame on the game board, and you track your Revenue and Population on your hotel-casino sheet.

If you renovate and remove tiles to place others, make sure to remove any bonuses the removed tiles gave you first. Simply move the appropriate marker up or down on the track a number of spaces equal to the amount shown on the tile.

Each player also retrieves his or her Bid marker at this time.

The player with the Turn Order Button passes it to the player on his or her left. That player is the first to act during the next turn.

If any No-Bid markers were placed on tiles or actions during the Flip New Tiles step, remove the markers now.

Once the game ends, players score Fame in the following categories:

You score 5 Fame if the yellow shaded section on your hotel-casino sheet is completely filled in with only yellow and/or green tiles.

You score 5 Fame if the blue shaded section on your hotel- casino sheet is completely filled in with only blue and/or green tiles.

You score 3 Fame if you can trace a route along an uninterrupted path of tiles from your casino entrance to your hotel entrance without passing through any tile walls.

Score this just like Population, except this is for Revenue.

You score 1 Fame for each three-quarters diamond shape you have at the end of the game.

You score 3 Fame for each full diamond shape you have at the end of the game.

The game ends immediately when either of these two conditions applies:

The winner is the player with the most Fame at the end of the game.

If there's a tie, then the player with the most cash left is the winner. If there's still a tie, the game is a draw. 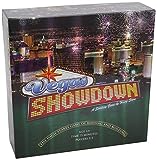 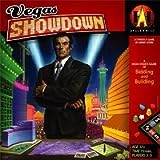