You and your opponents spell words with stackable letter tiles on the special game- board to score points.

You build words by playing letters across or down the board and by stacking letters on top of letters already on the board to form different words. It's this 3-dimensional game play that makes UPWORDS so unique and challenging to play.

You score points for each letter in your word and every letter tile under each letter of your word. Letters can be stacked five tiles high so your score can really add up fast. Build words, stack letters. Score high and have fun!

Build words to score the most points.

Turn all of the tiles letter-side down and mix them up to create a draw pile. Place the gameboard in the center of the table.

Each player takes a rack. Get a pencil and paper (not included) to keep score. Also, keep a dictionary nearby to check the legality and spelling of any challenged word.

Use the dictionary to settle challenges only.

You and your opponents draw one letter tile from the draw pile. Whoever draws the tile nearest to the letter "A" plays first. Play then proceeds to the left. Return the tiles, letter-side down, to the draw pile and mix them up again.

Whoever plays first must form a word of two letters or more that covers at least one of the four special game squares in the center of the gameboard. Please note: these are the four game squares with cutout corners.

All letters played on your turn must be in the same row of game squares either across or down. Tally and announce your point score, then draw letter tiles from the draw pile to replace the ones you played.

Note: A word is legal and can be used in the game if it is in the dictionary and it does not fall into any of the categories of illegal words.

Figures 1-6 show a consecutive sequence of plays. Arrows point out the word or words formed on each play. Point scores are given for each example. See Rule 6 for details on scoring.

You can play letters to form a word that reads across (from left to right only) or down the game- board (NEVER diagonally or up) and connects to a word already on the board.

Note: Any letter in your word that is adjacent to another letter or letters on the board must form a word.

For example, in Figure 2 the letter "N" in NET is adjacent to the letter "O" in MOOD which forms the word ON.

You can stack letters on top of letters already on the board to change a word into a different word.

Important: When changing a word already on the board into a different word, at least one letter from the old word must remain uncovered and be used in the new word.

You cannot stack letters to completely cover up an entire word.

You can build a new word and change a word already on the board into a different word on the same turn. For example, build across stacking the letter "N" on top of the letter "P" in LEAP to form the word SNACK and change the word LEAP to LEAN as shown in Figure 5.

For example, build down to form the word PLUS which connects with the word NET and makes it plural as shown in Figure 6. You score points for both words.

Any word that falls into any category listed below is an illegal word and cannot be used in the game.

You can challenge a word an opponent plays if you think it's misspelled or an illegal word. The word must be challenged before another word is played.

You may pass your turn at any time during the game. Sometimes it is to your strategic advantage to pass up a turn, especially toward the end of the game, to allow a better scoring opportunity to open up for you.

On your turn, you may exchange one of your letter tiles for a new one. Just turn the tile you want to exchange letter-side down and draw a replacement tile from the draw pile.

Return the tile you turned down to the draw pile and mix it up. As a penalty, you lose your turn to play.

Sometimes it is good strategy to give up a turn in order to exchange a letter. For example, if you draw a "J" or a "Z" late in the game, it may be to your advantage to exchange it on your next turn.

The game is typically over:

When the game is over, total each player's final score. Subtract 5 points from a player's score for each letter tile that he or she has not played.

The player who scores the most points is the winner of the game!

Follow setup and gameplay rules as explained above. Make words, one at a time, and score points for every word you make.

Note: During the game, you are allowed to exchange five letters without a penalty.

The game ends either:

Total up your score. Keep track of your solo game scores and try to improve each time you play. 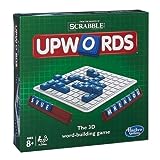 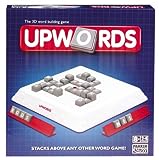 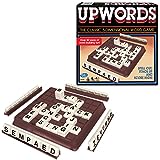