Unusual Suspects is a cooperative party game: the players win or lose together! One player will take on the role of the Witness, while the others will be the Detectives. The Witness is the only one who knows the identity of the thief.

He or she will help the Detectives narrow down the Suspect Pool by answering their questions until they are prepared to identify the Guilty Party.

But the Detectives have to be clever! The Witness cannot answer questions about the Guilty Party's physical description, so the answers will never be obvious. The Witness will have to imagine the Suspects' nature, habits, and tastes only by looking at them!

1 Shuffle the Question cards and place them face down on the table to form the Questioning Deck.

3 Shuffle the Suspect cards. Turn over the top 12 cards and place them face up on the table to create a 3 by 4 grid. This is called the Suspect Pool. Put the rest of the Suspect cards back in the box. You won't use them during this game.

4 Choose one player to be the Witness. The Witness:

5 The other players will be the Detectives 6 Now the investigation is ready to begin!

The game is played over several rounds, up to a maximum of 11. Each round is divided into 3 phases: Questioning, Trial, and Verdict.

First, any Detective turns over the top Question card of the Questioning Deck and reads it out loud.

Then, the Witness must answer the question with either "Yes" or "No" by placing the Question card face up below the Yes or No card, according to the answer.

Important: The Witness cannot give any kind of information besides the "Yes" or No" answer! No other words, gestures, or signals of any kind are allowed.

The Detectives can discuss the case only after the Witness has given their answer.

The Detectives now discuss the case, trying to figure out which Suspects can be identified by the answer the Witness has given.

The Detectives must eliminate at least one Suspect that does not fit the Witness' answer, declaring that this Suspect is Innocent.

The Detectives may choose to eliminate as many Suspects as they believe to be Innocent, but they must eliminate at least one. They can only eliminate a Suspect if all of the Detectives - or at least the majority of them - agree.

If the Detectives eliminate an Innocent Suspect, nothing happens. But, if they have eliminated the Guilty Party, the Witness must immediately say so and reveal the Guilty Party card. The game is over (see The End of the Game)!

When the Team decides to stop eliminating Suspects, this phase ends.

Then, multiply the round number by the number of cards eliminated and write the result in the next box. This represents the amount of time spent on the Investigation.

Playing Hint: The more Questions you ask, the more time you spend to eliminate each Suspect!

Once the Verdict Phase is complete, the next round begins with the Detectives revealing another Question card.


Example: In the first round, the Detectives turn over the Question "Do they have a record player?" The Witness says No" and places the Question card below the No card.

The Detectives, working together, decide to eliminate 3 Suspects who, in their opinion, own a record player, and turn those Suspect cards face down. None of them is the Guilty Party, so they write down their points on the Investigation Pad.

They eliminated 3 Suspects after the first Question, so they used 3 Minutes of time.

If the Detectives eliminate the Guilty Party, all the players lose the game! You can record your failure on the Investigation Pad.

If the Detectives eliminate all 11 Innocent Suspects (so the Guilty Party is the only face-up card in the Suspect Pool), you have caught the thief and you win the game!

You can keep the used sheets from the Investigation Pad in the box as a record of your best investigations.

If you're feeling a bit more competitive, try this variant:

Divide the players into two teams. The teams will conduct a series of Investigations, trying to identify the Guilty Party as quickly as they can.

At the beginning of an Investigation, each team chooses their Witnesses. The Witnesses secretly draw and look at one Guilty card (the Guilty Party is the same for both teams).

Choose the starting team. That team now plays through the Questioning and Trial phases, just like normal. But, instead of turning the eliminated Suspe ct cards face down, they are removed from the table and kept by that team. Each card collected is worth 1 Victory Point.

When the starting team has finished its Trial phase, the other team gets a turn. The two teams alternate until the Investigation ends - either because a team eliminates the Guilty Party, or they successfully identify them!

The End of an Investigation

If a team eliminates the Guilty Party, they score 0 Victory Points: discard any cards they collected during the Investigation. The other team scores 3 bonus Victory Points: draw 3 more Suspect cards from the deck and add them to your collection.

If a team finds the Guilty Party, they score 1 bonus Victory Point by drawing another Suspect card from the deck.

Now, both teams check to see if they have enough Victory Points to win. If they do, the game ends and that team wins! If both teams have scored at least the required number of points, then the team with the most points wins. If they are tied, play another Investigation.

If neither team has scored enough points to win, play another Investigation: Draw 12 new Suspect cards. The team that went second in the last Investigation gets to be the starting team this time. Both teams must choose a new Witness. 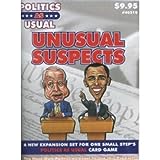