At its heart, Untold: Adventure Awaits is a collaborative storytelling game. Use these tips to make sure each Episode is fun and engaging for all players.


Bring the world to life for all players!

A game of Untold is set in players' imaginations. What you see in your mind will be different from how other players imagine it. To help create a shared experience, give characters names and use descriptive language wherever possible.

When you add details, the imagined world becomes more real, not just for you, but for others too. For example, rather than just going to "a castle", you could travel to "the abandoned Castle Falken, former home of the ancient Falken dynasty".

If you get stuck for inspiration during your turn, remember that this is a game where you should work together. It's fine to ask the other players to contribute any ideas they might have. Remember, you are working together to create the best story possible for your group.

This is the opposite of the previous tip. Often during a game of Untold, you will have "the most awesome idea ever!" - resist forcing your ideas on others, as doing so can discourage less confident players from sharing their own thoughts. If you have something to add, use the provided Idea Tokens.


Sometimes failure can be fun!

While you might think heroes should always succeed, this would actually make for a boring tale - failure adds drama! In Untold, it's likely that your character will be unsuccessful at least once during an Episode.

Try using an unsuccessful Action as an opportunity to add excitement to your story! You might be surprised. The bigger the challenge you have to overcome, the more rewarding your ultimate success will feel.


An icon can mean more than one thing!

When you roll your Story Cubes, the icons don't always provide an obvious answer - that's OK! The meanings of the icons are not fixed.

An apple icon could represent an orchard, a healthy meal, or a plan coming to fruition. By practicing finding inventive links, you'll get the most from your rolls and your story.


There is no 'I' in Adventure!

As there is no strict turn order in Untold, Question and Action Tokens provide a visual way to track whether a player has taken more turns than others in the game. If this happens, ask the player to hold back while you offer other players the opportunity to get involved. 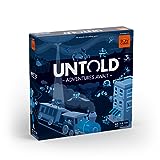