Start with a Baby Unicorn in your Stable, and begin building your Unicorn Army. Each Magical Unicorn comes with a special power, but don't underestimate the power of Basic Unicorns!

Use Upgrades and Downgrades to protect and build your stable. Instant Cards stop other players from laying down a card, so they'll either be your best friend or your worst enemy.

The first person with the required number of unicorns in their Stable wins! Everyone must bow down to them. They shall hereafter be known as The Righteous Ruler of All Things Magical...at least until the next game.

Gather all Baby Unicorns from the deck and place 1 in the Stable of each player. Place the rest of the Baby Unicorns in a stack. This will be your Nursery.

Shuffle the remaining cards and deal 5 to each player. The rest of the stack will be your Draw Pile.

Whoever is wearing the most colors is obviously the unicorniest, so they go first!

Turns go clockwise around the table, and each turn is made up of 4 phases.

Play an Instant Card at any time to stop someone from playing a card. Send the Instant Card to the Discard Pile after use.

Play an Upgrade Card during your turn to give someone's Stable a positive effect.

(Your own Stable is always a good choice!)

Play a Downgrade Card during your turn to give someone's Stable a negative effect. (Pick an opponent's Stable, duh!)

Play a Magic Card during your turn to create mayhem. Send the Magic Card to the Discard Pile after use.

Play a Magical Unicorn Card by placing it in your Stable during your turn. Each one comes with a special power!

Play a Basic Unicorn by placing it in your Stable during your turn. They don't have powers, but they are still special!

Each player starts with a Baby Unicorn in their Stable. You can only summon more by using special cards!


What if you run out of cards

If you're a stickler, the game ends when you run out of cards. If no one completed their Unicorn Army, no one gets to be The Righteous Ruler of All Things Magical.

If you're a rule-breaker, you can reshuffle the discard pile back into the deck when you're out of cards. The rules say not to, but you just don't give a care. You're a rebel. Good for you.

If you run out of Baby Unicorn cards at any point, root through your pockets for spare change, gum wrappers, or lint to represent additional babies.

When Pandamonium is in play, all of that player's Unicorns are Pandas, but their effects remain the same.

The first person to complete their Unicorn Army wins!


Words you need to know

Stable: The area where you play your Unicorns, Upgrades, and Downgrades.

In Play: Cards currently in a player's Stable.

Bring Directly Into Play: Add the card to your Stable immediately. This does not count as your Action this turn.

Sacrifice: Send a card from your Stable to the Discard Pile.

Destroy: Send a card from another player's Stable to the Discard Pile.

Discard: Send a card from your hand to the Discard Pile. 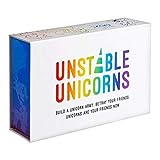 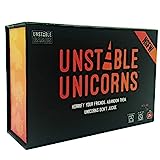 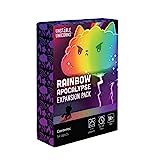