The Uncle Wiggily Game is most enjoyed by children 4 to 8 years of age. Players join Uncle Wiggily on an adventure through the forest.

They take turns moving their Uncle Wiggily tokens, according to the card drawn.

The simple rhymes found on each card are fun for children to learn; each verse tells the player how many spaces to move.

The cards also feature numbers-so children who cannot read are able to play. (Pre-readers will enjoy having a "grown-up" read the rhymes on the cards).

Be the first player to get your Uncle Wiggily token from his home (START) to Dr. Possum's house (at space number 100). Even if you're well behind during the game, you might just catch up and win!

Each player picks an Uncle Wiggily playing token and places it on or behind the START space.

Shuffle the Rabbit Verse cards and place the deck face down on the game board, on the title of the game.

Let's pretend you are the first player. Here's what you do:

The first player to land on space 100 (Dr. Possum's house) by EXACT COUNT is the winner.

If you are near Dr. Possum's House, and you draw a card whose number would move you past space 100, you must stay where you are.

For example, you are on space 97 and you draw a card instructing you to move ahead 4 spaces, you cannot move because Dr. Pos- sum's House is only 3 spaces ahead.

You could move ahead if you drew a "1" or a "2" space card. A "3" space card would win the game for you as you could move your piece, by exact count, onto Dr. Possum's House. 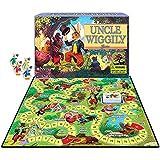