There are two ways to win:

Diagram 1: the 3 different pieces, from left to right: Tzaar, Tzarra and Tott.

Note : If you do not like to begin with a random start position, see points H. and I. below.

To begin the game, White makes one move. White must use this move to make a capture. The rules for capturing are very simple: pick one of your pieces (of any type) and move it to an adjacent space with an opponent's piece (of any type).


The Game: 2 Moves Per Turn

After White has started the game with only one move, players always have two moves per turn.


The First Move of a Turn

Diagram 2: the arrows indicate which black pieces can be captured by the white Tzaar.


The Second Move of a Turn

For the second move, you must choose between 3 possibilities:

A. A Second Capture


B. Making A Piece Stronger

Diagram 3: a single piece can jump onto a stack (ofany height) and vice versa! Also, stacks can jump on top of each other.

You are not obligated to use your second move. If you decide to pass, you just tell your opponent that it is his turn again.

Note: you can never pass the first move (i.e. the forced capture) of a turn!


For the Sake of Clarity

You win the game when you succeed in capturing the last piece of one of the three types of your opponent's pieces, or when you put your opponent in a position where the opponent cannot use their first move to make the forced capture.

Reminder: only single pieces and the pieces on top of stacks count when checking for the presence of the three types of pieces. The pieces in the stacks do not count.

If you do not like random start positions, put the pieces on the board according to the following diagram:

When playing the tournament version, the game begins with an empty board. The players take turns putting one of their pieces after another on the board. The pieces may be placed on the board in any order and it is allowed to switch from one type of piece to another as often as you want.

When all pieces are on the board, all spaces will be occupied and the game starts according the rules described above. 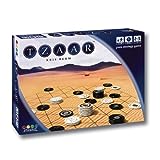 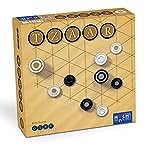