Turn the Tide is played out over a series of rounds equal to the number of players in the game. Each round consists of 12 hands. In each hand, players bid for two Tide Level cards with the aim of not winning the higher tide.

Score the most points by playing cards that will keep your tide level low and your life preservers afloat.

Separate the cards into two decks according to card back. Shuffle the 24 Tide Level cards (blue back) and stack them face down in the middle of the playing area.

Then shuffle the 60 Weather cards (yellow back) and deal 12 cards face down to each player. Place any leftover cards back in the box. Players may look at and organize their cards but keep them secret from opponents.

About the Weather Cards

Each of the 60 Weather Cards features a unique number between 1 and 60. (Every number is represented once). In addition, cards numbered 13-48 contain an illustration of either one or half life preserver in the top center.

Note: At first glance, the distribution of life preservers may seem unfair. However, the players with more life preservers have a higher concentration of Weather cards that are more difficult to play.

Twelve hands make up one complete round. Each individual hand consists of five steps, carried out one after the other, as follows:

When the last step is completed, the next hand begins. Once again, the top two cards from the face down Tide Level pile are turned up. Each player then secretly chooses a remaining Weather card, which is played openly when everyone has finished making a selection.

If you are eliminated from the round, take your Weather Cards as well as your accumulated Tide Level cards and turn them face down.


End of a Round and Scoring

A round ends after each player has played all 12 cards from his hand. Alternatively, the round ends instantly when there are only two players left in the game.

Example of Scoring in a 4 Player Game:

Take the 12 Weather cards that made up your hand, along with the corresponding life preserver tokens, and pass them all to the player on your left. (Turn all of the life preservers face up).

Strategy tip: Try to remember your cards from the previous round, since the player to your left will have those same cards in the next round.

Tally up the scores at the end of the last round. The player with the most points wins. 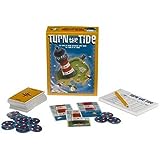