You will also need a pencil and a sheet of paper (which are not provided).

Be the player to score the most points in four rounds of play.

If any players are tied after four rounds, then those players will play an extra round or rounds until a winner is determined.

Each player chooses a set of same-colored dice. To determine the order of play, each player rolls one die with the highest roll going first, followed by the next highest going next and so on. Use a paper and pencil to record your scores.

Play continues until four rounds have been completed.

At this point the final score is tallied and the highest score is the winner.

If two or more players are tied at the end of regulation, then an overtime round (involving only the players that are tied) is played to determine the winner! 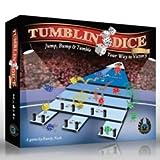