Give an Answer Sheet and a pencil to each player. Write your own names in the Target box, then pass your sheet to the player on the left.

Look at the name at the top of the sheet you were given. Now choose ONE question from the cards on the table and write an answer about THAT person.

Make sure you write it in the correct section. If you pick the question on the purple-colored mat, write in the purple section of the Answer Sheet.

Once everyone has written down an answer, pass the Answer Sheet to the left again. Look at the new sheet in front of you, pick a question that hasn't been answered and write down an answer about your new Target.

Keep on playing and passing until all the questions on the table have been answered. Now, instead of passing the Answer Sheet to its owner, turn it face-down in front of you.

Someone start by telling everyone the name of the Target on the sheet in front of them. Then read out a question on the table and its corresponding answer on the sheet. Once you've read all the questions and answers for that Target - it's points time.

The Target chooses their favorite answer about them (could be the most funny, creative or even accurate!) and then tries to guess who wrote it. The writer of the favorite answer then reveals themselves and scores one point! If the Target guessed who correctly, they also score one point. Scribble the points on the Score Pad.

Go around repeating this for each player. Once everyone's Answer Sheets have been read out, the player with the most points wins the game. Grab some fresh Answer Sheets, lay out new Question Cards and play again!

If two or more players have the same score at the end of the game, draw one new Question Card and get them to say an answer aloud about themselves. The other players then vote on who dropped the best truth bomb on themselves.

Whoever gets the most votes wins!

If there's still a draw... fight to the death. (Or play rock, paper, scissors). 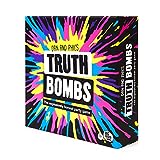