Stretching from Acadia to American Samoa - from Kobuk Valley to the Virgin Islands, our country's national parks represent a vast assortment of outdoor opportunities for all to enjoy!

Trekking the National Parks the board game is your chance to experience and explore these magnificent landscapes with your friends and family in a fun and spirited way.

Collect stones, claim parks, and earn points as you trek across the map visiting all of these natural treasures!

Welcome to Trekking the National Parks - a friendly competition where you and your friends will race to visit the many American national parks and experience their unique qualities.

To win, you must prove yourself as the most experienced traveler by moving around the map and attempting to score the most Victory Points. This can be accomplished many ways:

The golden arrowhead indicates Victory Points. Collect these wherever you can!

1 Place the Map board in the center of the table.

2 Put all 45 stones into the bag and mix them thoroughly. For each park location

on the map, randomly draw one stone out of the bag and place it on that location. Once the bag is empty, return it to the box; it will not be used again.

4 Shuffle the 6 Major Park cards and randomly pick 3 of them, placing them face up next to the board. Return the remaining 3 Major Parks to the box; they will not be used during play.

6 Shuffle the Trek cards and deal 2 cards to each player. Cards in a players hand are kept secret from the other players. Place the remaining Trek cards face down near the board as a deck. Then, take the top 5 cards from this deck and place them face up beside the board. Leave space for a discard pile near these cards.

For a 2-player game: ONLY use the Most Stones Bonus cards.

Give the First Player token to the person who last visited a national park, they will take the first turn of the game.

8 You are now ready to play Trekking the National Parks!

Beginning with the first player and proceeding clockwise around the table, each player takes a turn, one at a time until the game ends. You are granted exactly TWO actions during your turn.

You may choose to do 2 different actions OR the same action twice. These can be performed in any order you choose.

Trek cards are the currency of the game, and represent your ability to move across the map and experience the sights at each park. Every Trek card has two different pieces of information:

The number is used to move your Trekker to new parks on the map. The Trek card above can only be used as a tree icon OR to move a distance of 4. It is NOT worth 4 tree icons.

The icon is used to claim Park cards and to occupy Major Parks. Each Trek card has only one type of icon:

Important: The number is NOT the quantity of icons on the card. A Trek card is always worth a single icon. During the game players must decide how they will use their Trek cards: either for its number value to move, or, for its icon to claim a Park card or occupy a Major Park.

Draw 1 Trek card and add it to your hand. You may take this card from the face-up Trek cards or you may draw the top card from the deck (this is a blind draw).

If you draw a face-up card, immediately replace it by revealing a new card from the top of the deck (there should always be 5 face-up cards visible). If the Trek card deck is fully depleted, re-shuffle all the discarded cards and refresh the deck.

The hand size limit is 12. If you are holding more than 12 Trek cards at the end of your turn you must discard these extra cards.

If at any time, four of the five face-up Trek cards are the same color, all five cards are immediately discarded, and five new cards are turned face up to replace them.

Example: Since four mountain cards are showing, all five face-up Trek cards are immediately discarded and 5 new cards are flipped face up.

To claim one of the face-up Park cards, your Trekker must be at that park location

on the map, and you must reveal Trek cards from your hand with icons that match the icons shown on the Park card.

Discard these Trek cards, and then take the Park card and keep it in front of you (face down). After claiming a Park card, immediately replace it with a new card from the top of the Park deck. There should always be 3 face-up Park cards visible and these are the only Park cards available to claim at any time.

Example: The green Trekker is on Lassen Volcanic. On his turn he takes the Claim a Park Card action and plays a blue canoe, purple mountain and red boot card from his hand. He now gets to claim the Lassen Volcanic Park card and places it face down in front of him.

To occupy one of the three Major Parks, your Trekker must be at the Major Park location

on the map, and you must reveal Trek cards from your hand with icons that match the icons shown on the Major Park.

Discard these Trek cards, and then take one of your Campsites and place it on the Major Park card to show that you have occupied it. You may only occupy each Major Park once.

Note: The three Major Parks established at the beginning of the game stay in play for the duration of the game. These cards are never taken by players or discarded. All players are free to occupy any Major Park in play, even if it has already been occupied by another player.


Each Major Park card also grants a unique ability to players who occupy them:

The end of the game can be triggered in two different ways:

When one of these two things happen, keep playing until the player to the right of the first player finishes their turn. This ensures that each player has an equal number of turns during the game.

Example 1: Terry (player 1) holds the First Player token. On her turn, she collects the last stone available on the map. All other players get one more turn and then the game will end.

Example 2: John (player 4) is sitting to the right of the first player. On his turn, he claims his 5th Park card. The game ends at the end of his turn.

Before tallying all the final scores, all of the Stone Bonus cards are awarded to players in the following manner:

Award the 2nd MOST Stones Bonus cards: The player who has collected the second most amount of a stone color is awarded the 2nd Most Bonus card for that color.

If two or more players have collected an equal number of stones and would both win a Most Stones Bonus card, it cancels the award and no one receives it! This is also the case for players who are tied to win a 2nd Most Bonus card.

Note: The small number in the bottom right of all Stone Bonus cards tells how many stones of that color are available at the start of the game.

Players tally up all the Victory Points they have acquired from:

The player with the most Victory Points is declared the winner! 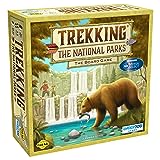