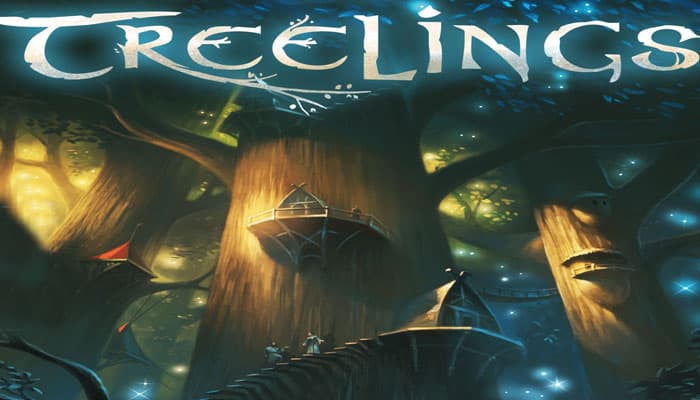 In the world of Treelings, construction is well underway in preparation for the annual firefly festival!

Beautiful, glowing swarms of fireflies may only be released from the highest platforms in the city during the upcoming summer solstice. 6 different guilds reside in the city and will do everything possible to build their own tree as high as possible in each district.

As chief of your district, you decide each round which guild you wish to support in your part of the city.

Of course, this is not for entirely unselfish reasons - after all, you want to lure the audience to your spectacle on the festival day and send as many fireflies glowing brightly to freedom.

Think carefully about which guild you would like to support when building tree platforms in your district and don't forget to keep an eye on your neighbors.

Because only the highest platforms are used at the firefly festival - and it could end up being those outsides of your district.

The 108 guild cards represent the 6 different guilds established in your city a long time ago. There are 18 cards in the game from each guild, and each of them has a specific way of building platforms on the trees, as well as its own color.

Shuffle the guild cards face down. Deal 3 cards to each player. Now you. Overlap cards of the same type on top of each other. This represents the growing tree of the respective colored guild.

place these cards face up in your own district, directly in front of

The common market place is in the middle of the table.

Important: Cards in the draw pile are always kept face down. As soon as you draw a card from the draw pile, it is always laid open for every - one to see.

Example: How cards are arranged in front of each player:

The tallest player receives the starting player card and will keep it until the end of the game. Play is carried out in clockwise order.

At the beginning of the game, place 5 cards from the draw pile face up to form the market place in the middle of the table.

On your turn, perform the following action in order. All actions must be carried out.

If there are fewer than 5 guild cards in the marketplace, draw cards face up until there are exactly 5 once again.

Now it's time to bring the guilds to your district. You have two options:

Once placed, cards can no longer be moved in your district.

In this example, there are several possibilities: You can take both the blue guild cards or choose to take the green, yellow and brown cards.

However, you can also choose to just take the green OR the yellow OR the brown guild card.

Each player has a personal district in front of themselves. As the game progresses, your district expands. When you wish to build guild cards in your district that are not already in front of you, start a new tree on either side of existing trees, but NOT in between.

You may only have each guild represented once in your district. This means that you cannot have more than one of a like-colored tree. Always lay the guild cards out so that it is easy to see exactly how many cards form each tree.

As soon as a player reveals the firefly festival card, the final round of the game is triggered. Play continues as usual until the start player is reached. However, the game will end before the starting player takes another turn.

All remaining cards in the marketplace have no effect on end game scoring. A player can only score points can through cards in their own district.

A tree is only eligible for scoring depending on the height of both neighboring trees (those directly adjacent to the left and right of the tree).

Warning: This applies not only to your own trees, but also to the trees of your neighboring players!