Each player chooses a color, places his starting marker before him (in his play area) and his locomotive as a scoring marker in the train house.

When playing with 2 or 3 players, remove the 10 city cards with dashed borders (2 per each color), placing them back in the box. These are not used in the game.

Sort the 35 (or 25 with 2 or 3 players) city cards by color, shuffle each color separately, and place each stack face down next to the board.

Each player draws 1 card from each color (1 red, 1 orange, 1 yellow, 1 green, and 1 blue), putting them in his hand and keeping them secret from his opponents. He looks at these cards to see what dries they represent. Place the untaken cards aside to be used in the next round, without looking at them.

Each player tries to connect his 5 dries with tracks.

When a player's 5 dries are connected, the round ends immediately. This usually happens on the player's turn, but happen on another player's turn. The other players lose points based on how many tracks each needs to place to connect their 5 dries.

After several rounds, the player with the most points is the winner.

The starting player begins and the others follow in clockwise order.

Tip: it is generally not a good strategy to start your network to close to another player's starting point.

From these starting points, the players begin their networks.

Per turn, each player may either place:

As the individual networks grow and connect to each other, a player's options grow, so that he can place track on what was other players' networks, but is now connected to his.

Each player must, in each turn, place at least one track.

Tip: a player should not connect to others' networks too early in the round

When, after a track is placed, a player's 5 dries are connected to each other, the round ends immediately. The player shows his cards to prove this. If his dries are not connected, the round continues with that player's cards face up in his play area.

Extreme cases: The round also ends when all tracks have been placed.


Scoring of a Round

Each player, except the winner of the round (the player whose 5 cities are connected), counts how many tracks he would need to place to connect his 5 cities. When counting the missing tracks, each player counts:


Preparation for the Next Round

The game ends after all players have scored for a round and at least one player moves his locomotive to or beyond the red space at the bottom of the scoring track.

If several players tie with the most points, they rejoice in their shared victory! 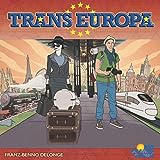 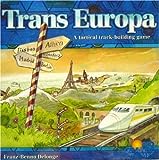