To be the first player to complete a lab experiment after moving the Totally Gross Slime 10 spaces.

Playing pieces are moved around the perimeter spaces on the board.

The center of the game board has four kids on it. Each player picks one of these kids. In front of each kid is a Score Line. Players move their Totally Gross Slime from 1 to 10 on the Score Line after selecting a kid.

The game board also has spots for Professor Cards and Totally Gross Cards.

When a player stretches his/her slime all the way to number 10 on his/her Score Line, that player is ready to perform a Lab Experiment. The first player to correctly complete his/her experiment wins the game. 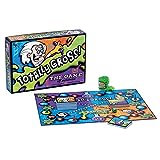 Totally Gross: The Game of Science 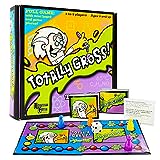 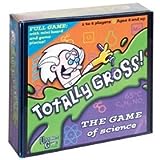