Score the most points by quickly placing part cards next to high scoring cars without repeating color or shape.

Shuffle the four lane cards and put them face down in a line between you and your opponent (see illustration for orientation). Turn two of the four cards face up. Put the checkered flag card next to the lane cards, within easy reach of both players.

Separate the rest of the cards into two decks according to card back (red and blue) and give each player one deck. Shuffle your cards and hold them in one hand, face down.

When you're ready to begin, both you and your opponent turn over one of the remaining face down lane cards to start the game.

Then, without taking turns, race to get rid of cards by placing them face up into eight rows that correspond with the numbered cars on either side of the four lane cards. As you place cards, pay special attention to the to the following rule:

There can be no repeat of color or car part in any row.

For example, if there is already a purple traffic cone and an orange spark plug in a row, you cannot place anything purple or orange, nor any traffic cone or spark plug anywhere else in that row.

If you run out of cards, or cannot play any more cards without repeating color or part in any of the eight rows, shout "Top Speed!" and take the checkered flag card. This ends the game.

Next, check over all eight rows for mistakes of repeat color or part:

If there is no repeat of color or shape in a row, turn over the bottom most card in that row (furthest from the center lane card) to reveal who played it.

If there is a repeat of color or shape in a row, turn over the "mistake" card and place it back face down crosswise in the row to reveal who played it. Note: If there are multiple mistakes in a row, turn over only the closest mistake card to the center lane card.

Add the points on the cars at the top of each row in which your color is at the end but not crosswise.

The person with the checkered flag card also gets 3 bonus points.


Note regarding tie games: If the point totals are the same for both players, the winner is the player with fewer cards left in hand. If both players have the same number of unplayed cards, the player holding the checkered flag card wins.

At the end of the game, there are four cards in the #1 car row: yellow tire, red helmet, blue tire, and yellow muffler.

The blue tire is the first "mistake" card in the row (the yellow muffler mistake happened after that). So turn over the blue tire card and place it crosswise.

From the back of the crosswise card, you can see that the blue player made the mistake, so the red player gets the 1 point for this row. 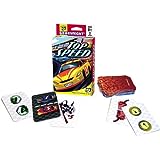