You reconstruct treasure maps by combining clues, either alone or with the help of other players, until the location of a treasure is determined.

Then, you try to be the first at the location to raise the treasure. For that, and for contributing clues, shares of the treasure are awarded. By picking up amulets - and using them wisely - you will gain an advantage (and protection from the curses, too).

At the end of the game, the player with the most gold coins wins.

1. Assemble the variable game board showing the island (it consists of 3 game board sections and 3 clamps).

The game board sections are double-sided. The 3 front sides (a, b, c) show fewer island spaces than their reverse sides (A, B, C). You can combine these sides in any way you wish, e.g.:

Flip the clamps if you arranged the sections according to the second possibility.

You can set up the game board to show 32 different islands, providing variety and a new challenge with each game of TOBAGO.

2. Place the 4 huts, 3 palm trees and 3 statues on the island following the rules below:

4. Pile the 21 amulets on the corresponding symbol located on one of the clamps.

5. Each of you takes the ATV (All-Terrain Vehicle) of your color and places it on any space of the island.

7. Create four treasure map areas next to the game board by sorting the 68 site markers by color into four piles.

8. Each of you draws one of the 52 clue cards and places it face up on an empty treasure map (below the pile of site markers). Mark the clue card you placed with one of your compass roses.

Shuffle the clue cards and deal each player 4 clues face down (in a two- player game, deal 6 clues each).

You take turns in a clockwise direction, starting with the player who has visited an island most recently. During your turn, you may perform one of the following actions:

At any time during your turn, you may, if possible, raise treasures and/or play one or more amulets.

A. Play A Clue Card

Choose a clue card from your hand and place it face-up below the last clue card of one of the treasure maps. Then, mark the clue card just played with one of your compass roses.

New clue cards are always placed below the other cards of a treasure map. A treasure map may contain any number of clue cards from any number of players. Then, draw a replacement card from the clue card deck. Your hand should always contain 4 cards (6 cards in a two-player game).

Then, draw a replacement card from the clue card deck. Your hand should always contain 4 cards (6 cards in a two-player game).

If you are unsatisfied with your clue cards you may exchange them all with the same number drawn from the clue card deck by playing an amulet.

Mark these spaces with the correspondingly colored site markers as soon as it is possible to cover every space with the available site markers.

(Often, it will take several clues to reach this point). Afterwards, for each new clue added to the treasure map, remove the site markers from the spaces the clue eliminated. The location of the treasure is determined as soon as only one site marker of its color remains on the island. Only then, can the treasure be raised.

It is possible for site markers belonging to different treasure maps to share the same space on the island.

B. Move your ATV

You can move your ATV up to 3 legs. The following counts as one leg:

1. Moving Within A Terrain

Any movement within the same terrain type, no matter how far.

Moving into an adjacent space of a different terrain type (e.g. from the jungle to the adjacent lake space).

Note: ATVs can enter any space on the island, even if it contains a palm tree, a hut, a statue, or other ATVs. ATVs cannot enter the ocean.

Anna adds the clue "In the jungle" to the treasure map in the white treasure area.

Accordingly, the white treasure is located next to a hut and in the jungle. This eliminates all spaces which, though next to a hut, are not part of a jungle.

Around each of the four huts, all white site markers not located in the jungle are removed.

The example to the left shows the situation at one of the four huts.

When adding a clue to a treasure map the clue …

Looking at the situation in this example reveals why Anna cannot add the clue "In the jungle" to the black treasure map: None of the jungle spaces lies next to a statue O.

You can raise a treasure if these two conditions are met:

To raise the treasure, place one of your compass roses below the last clue card of the corresponding treasure map. Then, remove the site marker and put it back on its pile.

Caution! Don't give away what kind of treasure card you have seen. Especially not if you have drawn a curse card. If only you possess certain information about the contents of the treasure, this will give you an advantage when it comes to the distribution of the treasure.

Turning up a curse card during distribution means the treasure is cursed.

The curse has two consequences:

Afterwards, the curse card is removed from the game. The lost treasure cards are discarded together with the ones not distributed. If the second curse card is among these discards, remove it - without it taking effect - from the game, too. Take back your compass roses still on the treasure map.

The player who claimed the last treasure card during the distribution starts a new treasure map by playing a clue card face up from her hand in the now empty treasure area. The card is marked with one of the player's compass roses and the player draws a new clue card to replenish her hand to four clue cards (6 clue cards in a two-player game).

Special case: If the first card turned up in the distribution happened to be a curse card and no treasure cards were distributed, then the player who raised the treasure starts the new treasure map.


The Mysterious Appearance of the Amulets

A mysterious force emanates from the statues each time a treasure is raised. Where their unrelenting gaze strikes the coast, amulets surface in the ocean and are swept ashore:

Take three amulets from the amulet pile and place one each on the coast in the last island space lying in the direction of view of each statue, unless this space is already occupied by an amulet.

Then, with a grinding noise, the statues turn to face where the next amulets will surface: rotate each statue 60° in a clockwise direction, until it faces the next adjacent space.

You can only pick up amulets when it is your turn. There are two ways to do this:

It is possible to collect more than one amulet during an action.

Lola takes the first leg to drive to amulet A. As she has to stop there to pick it up, she needs another leg to reach the end of the mountains. She uses the third leg to cross over to the beach, where she picks up amulet B from underneath Roger's ATV.

Now it's Roger's turn. He is annoyed by Lola's play, as otherwise he could have taken amulet B without having to move his ATV. Roger decides to pick up amulets C and D. To do that, he drives along the beach first, and then changes terrain twice.

Roger cannot reach amulet E in the scrubland - not even if he discards an amulet to take an extra "Move your ATV" action, as picking up amulets is not allowed on an action granted by an amulet.

A hint for experts: If Roger has an amulet at the start of his turn he could snatch amulet E from underneath Anna's ATV: First, he discards the amulet and takes an extra "Move your ATV" action to drive to the space containing amuletC. He can- not pick it up, as he reached it using the amulet's extra "Move your ATV" power. Then, he starts his regular action. It takes him two legs to pick up amulet D and on the third leg he takes amulet E.

You can play as many amulets as you like at any time during your turn, (even amulets you just picked up in the same turn). Each amulet played grants one of the following powers:

Amulets that were played or discarded are returned to the common amulet pile.

Lola cannot raise the grey treasure, as there are still two grey site markers remaining on the game board. Therefore, she uses an amulet to remove one of the site markers. This leaves the location of the treasure in the exact space where her ATV is already standing.

Now, Lola raises this treasure before taking her regular action, in which she moves her ATV to the black site marker and then raises the black treasure, too.

Now, Lola uses another amulet to take an extra move with her ATV, moving it to the space containing both the last brown and the last white site markers. Finally, she raises both treasures separately, in any order she wishes.

Experienced players can incorporate additional amulet powers into the game. As with the other powers, using a power costs one amulet. These powers only effect treasure maps belonging to treasures for which the exact location has not yet been determined.

Swap the positions either of two single compass roses or of two Double-Claims on the same treasure map.

Now, each of you counts the number of gold coins on the treasure cards gathered. Whoever has collected the most gold coins wins the game. 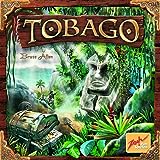