Tip of the Tongue Game Rules Be the player with the most points when the game ends (see Rounds). One point is awarded for each correct answer a player can spit out within two seconds.

The oldest player (you know who you are) begins the game by being the first "reader". The player to the right of the reader is the scorekeeper for Round 1. The scorekeeper should write each player's name and the number of rounds on a piece of paper similar to below.

The reader holds the Buzzer Case so they can easily read the top card through the window in the case (other players should not be able to see it).

Place a thumb on the Tongue-Two-Second Timer for easy buzzing. On the card there are six Tip of the Tongue trivia questions. The correct answer for each question is indicated in bold after each question.

Starting with question #1 and beginning with the player to his left, the reader asks each player a question (in order) on the card. If there are more than six players, the reader will need to advance to the next card in the Buzzer Case in order to make sure each player gets to answer one question in the round.

Once the questions on a card have been read, it may be set aside, face up, to form a discard pile.

After the reader reads a question to a player, he immediately presses the Tongue-Two-Second- Timer. The player must give the correct answer before the 2-second timer sounds.

In order to earn a point, the player must finish his answer before the buzzer finishes buzzing (if there is a discrepancy as to the timing of the answer and buzzer, the opinion of the majority rules, the scorekeeper is the tie breaker).

As soon as this is over, the reader begins to read Question #2, to the next player, and so on, until each player has answered one question and Round 1 is finished.

In the next round, the player to the left of the reader for Round 1 becomes the new reader and the previous reader becomes the scorekeeper.


When the game is finished, each player should have been a reader for an equal number of rounds.

When the determined number of rounds have been finished, the scorekeeper for the last round totals the points for each player. The player with the highest points is the Tip of the Tongue trivia winner!

When the game is over, collect the cards from the discard pile, and flip them so the opposite color sides are facing up. Slide them behind the stack of cards that are in the top portion of Buzzer Case, so that when they are rotated through, the questions on the opposite

color side will be read. When both sides of deck #1 have been read, then pull deck #2 from the storage area and rotate through this deck in the same way. 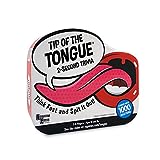 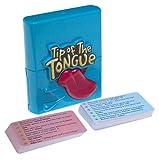