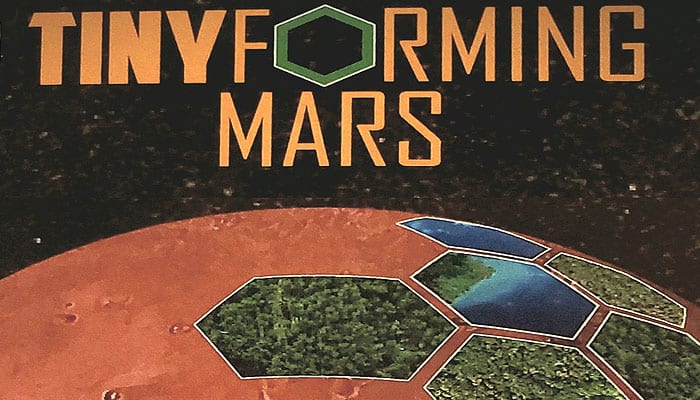 TINYforming Mars is a 1-2 player game set in the distant future; where mankind has mastered the technologies needed to turn our lifeless neighbor, Mars, into a thriving destination for humanity.

Each player is attempting to terraform Mars by completing projects that fulfill one or more of Mars' paramenters for sustaining life; those being: Heat, Oxygen (provided by Greenery), and Water.

The player that is able to complete more projects towards this goal, while building cities on prime Martian real estate, will be the winner.

The game takes place over sever- al rounds, known as Generations, in which players will alternate taking turns. First the players will draft Project Cards which describe Projects that they have access to.

Then, on a player's turn, he can complete one of his own Projects, one of the Standard Projects, or pass. When both players have passed, the Generation is over and players collect income to begin the next Generation.

The three parameters: Heat, Greenery, and Water are represented by Red, Green, and Blue Cubes, respectively. The players will acquire or place these Cubes by completing Projects and Standard Projects.

The three Parameters, Heat, Greenery, and Water are how you terraform Mars. They are represented by Red, Green, and Blue Cubes, respectively. They are acquired by activating Card Projects and Standard Projects.

When at least 2 out of the 3 parameter Cube types have been exhausted from the supply, the end of game has been triggered and that will be the final Generation.

When a player gains a Heat Bl Cube, he takes a Red Cube from the supply and adds it to his own personal supply. Each Heat Cube in a player's personal supply is worth 1 victory point at the end of the game. A Heat Cube on the map is worth -1 point to any city adjacent to that Heat Cube.

When placing a Greenery Cube, take a Green Cube from the supply and add it to a vacant hex on the map that is not reserved for water. Each Greenery Cube that is adjacent to a city scores that city's owner 1 victory point - plus 1 additional VP if it is adjacent to only that player's city and not his opponent's city during end game scoring.

When placing a Water Cube, if the hex has a Tag, gain a matching Resource Token from the supply if there are any available. In addition, if the Water Cube is placed adjacent to any other Water Cubes, the placing player gains 1 Credit for each adjacent Water Cube.

During the Income Phase of a Generation, a Water Cube adds 1 to the income of each adjacent city. Each Water Cube that is adjacent to only one of the two players is worth 1 victory point to that player at the end of the game.

Each map of Mars is made up of 19 hexes. There are 14 hexes that can have Greenery Cubes or City Cubes and 5 blue-tinted hexes that are reserved for Water Cubes.

A Bonus Hex has a Tag in the center and a thick border matching the color of the Tag. If a player has a city in a Bonus Hex, it counts as having one of that Tag for as long as his city is there. There are 5 Bonus Hexes.

There are 9 Empty Hexes that offers no additional benefit.

A Water Hex has a light blue background. If a player places a ~ Parameter Cube in a Water Hex containing a Resource Token icon, he immediately gains that token to his supply.

On a player's turn, if he meets all the requirements of one of his Project cards (the sides facing him), he can activate that Project in order to perform that card's ability. These abilities usually allow the player to gain a Heat Cube or place a Greenery or Water Cube on the Map.

The effective use of Project cards will help win the game. A player can only activate each of his Project cards once per Generation.

2 Cost in Credits: If the Cost has an * after the number, the cost can be reduced by an effect of the Project. When paying for a Project, the player must place 1 Credit Cube on the Project card to show he has used that Project this Generation. Additional Credits used to pay the cost are returned to the supply.

If a player gains Credits during an Action Phase, he is not allowed to take any Credits that have been placed on Project cards.

3 Requirements: Each Project requires that you have access to a certain number and type of Tags. The Tags can come from any combination of your Project Cards (see #6), your cities on bonus hexes, and from spending (discarding) Resource Tokens.

In addition to the Tags, some Projects also require that a certain number of Parameter Cubes. The Heat requirement refers to the combined amount of both players' personal supplies of Heat Cubes plus any Heat Cubes on the map. The Greenery or Water Cube requirement, refers to green/blue Cubes on the Map.

4 Effect Icons: The ability of the project is depicted here for quick reference. Also, The background color of the card indicates which of the three parameters the project will help complete. Red/Heat, Green/Greenery, and Blue/Water. There is also Grey; this type will not complete parameters, but will offer some other ability.

5 Effect: The ability of the Project card is described in words to correspond with the Effect Icons. If there are no available Parameter Cubes that match the corresponding Project, that Project cannot be activated.

6 Tags: Each Project card immediately offers 2 Tags on the side facing you that can be used to meet the requirements of your other Project cards or of a Standard Project.

You do not have to complete the Project to gain the Tags the Project provides, this is automatic and you have them as soon as the cards are chosen at the beginning of each Generation. The 5 Tag types are:

Once per Generation, a player can complete one of the five Standard Projects if he meets all requirements of the chosen one.

1. Sell Patent: Gains 1 Credit. There are no requirements or cost for this. If there are no Credits in the supply, a player cannot take this Standard Project.

2. Build City: Place or relocate one Player Cube on the map as a city, observing the following rules:

If a player has already placed his cities, he may take this Standard Project to relocate one of his cities to a new hex, observing all the same placement rules.

3. Import Water: Place an available Water Cube from the supply onto a vacant hex reserved for water.

4. Greenhouses: Place an available Greenery Cube from the supply onto a vacant hex not reserved for water.

5. Energy Farms: The player gains an avail- able Heat Cube from the supply.

When a Parameter Cube is placed in a space reserved for a Water Cube that has a Tag icon, the placing player gains a Resource Token matching that icon from the supply.

If there are no matching Resource Tokens available, the player gains nothing. A Resource Token can be spent by returning it to the supply when a player needs that matching Tag for a Project or Standard Project.

Some Projects offer the activating player their choice of an available Resource Token. When this ability is activated, the Resource Token comes from the supply. The three types of Resource Tokens are Nature (x2). Production and Science:

The first phase of each Generation is the Research Phase. During this phase, the players will draw the Project cards that they will have access to that Generation.

Starting with the Generation's start player, take a Project card from the draw pile, flip it over, and decide which Project will face you and which will face your opponent. The second player repeats this process for the second Project card.

The starting player then repeats this process for the third and final Project card. At the end of the Research Phase, each player will have access to only the 3 Projects that are facing them.

The Generation's start player will either complete one of his Project cards, complete a Standard Project, or Pass. After he takes one action, the second player will take one action.

Actions will be taken, one at time, between each player, until one player passes. After a player passes, he can no longer take any actions during that action phase. The player who has not passed can continue taking actions until he passes.

Note: He still has access to the Tags provided on the bottom of his Project cards whether the Project is activated or not.

Reminders: A player may never complete the same Project twice in the same Generation.

A player may only complete 1 Standard Project per Generation.

If a player should gain Credits because of an action and there are not enough available from the supply, he receives as much as is in the supply and the rest are lost. Credits placed on Projects cannot be removed during the Action Phase.

After the start player has added his Income Phase Credits to any Credits he did not use during the Action Phase, he must return to the supply all Credits above 5 (Martian taxes are severe). The second player collects income following the same rules.

Check for End Game: If the supply of Parameter Cubes has not been exhausted from at least 2 of the 3 types and there is at least one vacant hex on the map, the next Generation begins and the start player will shift to the player who was not the start player during the current Generation.

If the supply of Parameter Cubes has been exhausted from at least 2 of the 3 types or there are no more vacant hexes, the game is over and final scoring takes place.

When the supply of at least 2 of the 3 types have been exhausted or there are no vacant hexes on the map, that Generation will be the final Generation of the game.

Once the last Generation has completed, the players will calculate their scores:

If players tie, compare the following until one player has more than the other player in this order:

If players want a more intense game, apply the following rule: During setup, arrange the Parameter Cubes in a straight line by type.

Note: If the 11th Heat Cube or 4th Water Cube is needed because of a Project or Standard Project, and it is still attached to the Greenery or Heat Cube, respectively, remove the needed Cube and the bonus placement will no longer apply to that Parameter.