There's been an explosion in the laboratory! To further complicate things, due to the constant and paradoxical nature of time travel in science fiction, today's or tomorrow's or yesterday's contest has apparently become unstuck in time. What is "the present", anyway?

Each player should place their time machine card with side B face up, oriented so that the backward and forward arrows align with the orientation of the timeline. This side has two separate boxes for fuel, each corresponding to one of the two arrows.

When time passes, reveal the topmost event token from the stack. Place it in the timeline wherever it falls in numerical order.


The most recently placed event token, no matter where it is in the timeline, is considered to be "the present". When travelers return to the present each round, they are relocated so that they are next to this event token.

Players may now choose to move their travelers backward or forward in time. When secretly choosing how much fuel to spend, each player should place it in the box of their choice on their time machine card, indicating which direction they wish to travel in the timeline. 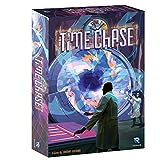